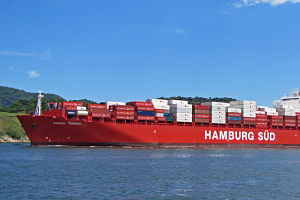 The respective boards of Maersk Line and Oetker Group have approved the agreement for a takeover by the former of shipping company Hamburg Süd, in a deal first announced last December.

The acquisition of the Oetker subsidiary will add 20% to Maersk Line’s capacity and 26% to revenues, mainly on the north-south trade lanes to Latin America, according to a research note by Jefferies when the deal was first announced.

It will also raise Denmark-headquartered Maersk’s share of global capacity to 18.6% from 16%. The combined fleet will consist of 743 container vessels.

Maersk will pay €3.7 billion (US$4 billion) to buy its smaller rival using a combination of cash and debt. It will finance the acquisition through a syndicated loan facility.

The deal reflects a trend of consolidation in the shipping industry, which is suffering from record low rates and overcapacity. Back in August, the collapse of major player Hanjin provided further evidence of the pressures on the sector.

Combined, the two companies will target operational synergies in the region of $350m-$400m annually over the first couple of years. Cost synergies will be derived from integrating and optimising the two companies’ networks, as well as standardised procurement, according to Maersk.

Søren Skou, CEO of Maersk Line, said: “The acquisition is cementing our position as the largest and leading carrier in container shipping, and it will provide great opportunities for the employees of both companies.”

“By keeping Hamburg Süd as a separate and well-run company, we will limit the transaction and integration risks and costs while still extracting the operational synergies,” he added.

The US Department of Justice and the EU Commission have already approved the proposed acquisition and Maersk expects it to complete by the end of this year.