Grimaldi adds ro-ro services in Europe and beyond 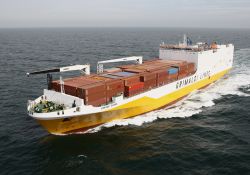 Italian ocean forwarder Grimaldi has made a number of recent additions to its services in the Mediterranean and to West Africa.

Most recently the company has added a fourth vessel – the MV Grande Ghana (pictured) – to its Mediterranean Express service (MEX), which moves between the port of Valencia in Spain, via Italy and five African ports on the West Coast (after Morocco), finally calling at Lome (Togo) after an 11 port rotation. The Grande Ghana has a cargo capacity of 2,000 vehicle units, 2,000 metres of rolling cargo and 800 TEU containers, meeting demand on the MEX service, which predominantly carries rolling cargo, containers and project cargo.

The introduction of the vessel means the MEX service has increased its capacity for rolling stock and containers by 30%.

Grimaldi said the frequency on the service will now be 11 days, rather than the previous two weeks.

In addition, this month Grimaldi also strengthened its connection between Italy and Greece for passengers and freight. The service calls between the Italian port of Ravenna and the Greek  ports of Igoumenitsa and Patras. Along with up to 1,000 passengers, the MV Catania, which is being deployed on this service, is able to transport 2,250 linear metres of rolling cargo, 170 cars and 1,000 passengers.

Finally, as reported last month, February has also seen the launch a new direct maritime service between the port of Civitavecchia, near Rome, and the North American ports of Baltimore and Halifax for the transport of cars and other rolling cargo. he new link will be the first direct and regular service between the Mediterranean and US for vehicle transport. Four vessels are being deployed on the service and each have a total loading capacity of 25,000 vehicles. The transit time between Italy and North America will be 13 days.