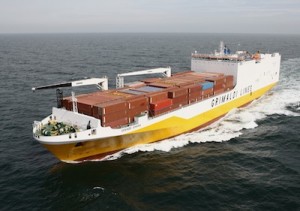 Maritime logistics provider, Grimaldi, is improving the frequency of its Mediterranean Express (MEX) service with the addition of a fifth vessel, which will be deployed from early 2016. The company already has four con-ro and multipurpose vessels supporting the service.

From September it has announced that the frequency of shipments between the Mediterranean and West Africa will be reduced from 12 to ten days. With the addition of the fifth vessel next year, that frequency will be further reduced to eight days according to the company, which also has plans to extend direct calls to other ports situated east of Nigeria.

Currently the service moves between the port of Valencia in Spain, via Italy and five African ports on the West Coast (after Morocco), finally calling at Lome (Togo) after an 11-port rotation.

The latest addition to the service follows the deployment of the Grande Ghana back in February this year.

Grimaldi said the plans will increase cargo capacity by 35% for both containers and rolling cargo.

The MEX service was launched in 2010.

Further investment to support FCA
Grimaldi has also recently invested $165m in three new pure car and truck carriers (PCTCs) for deployment on its service between the Mediterranean and North America, supporting shipments of vehicles for Fiat Chrysler Automobiles (FCA). In March it announced it was investing $300m in five PCTCs for the weekly service.

The vessels will be built by the Jinling shipyard in China and will be equipped with eight decks, four of which will be hoistable, providing capacity for 6,700 cars. Jinling has also built six ice-class ro-ro vessels for Grimaldi.

The latest order means Grimaldi has completed its programme to enhance its car carrier fleet with eight new units and the option for a further eight. In addition, the company has five con/ro vessels on order that will be delivered by 2016 to its subsidiary company Atlantic Container Line. Each will have a loading capacity of 3,800 TEU, 28,900 sq.m of rolling freight and 1,307 cars.