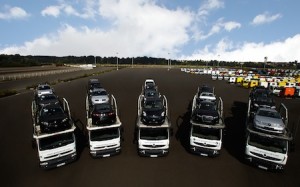 Transport and logistics provider Groupe CAT has revealed that it will be investing more than €12m ($16.5m) in 100 car transporters for deployment in Europe by the end of this year. The move is part of the Vehicle Logistics division’s three-year development plan, which was rolled out in 2013. It will bring Groupe CAT’s car carrier fleet in Europe to more than 700 units.

The company said the investment would allow it to renew part of its fleet, as well as strengthen its capacities in new markets with high demand. The tender for the supply of the equipment is still in progress, according to the company.

The investment in new equipment will also go to support operations resulting from new commercial contracts and an expanded scope of operations, notably in Russia, said the company in a statement. A spokesperson for Groupe CAT confirmed that this would be with Volkswagen and that it involved the movement of vehicles from Nizhny Novgorod.

A percentage of the transporters will be assigned to international routes, including Russia, with the rest reserved for national distribution in Europe.

Groupe CAT said it would be conducting a major recruitment campaign for drivers.

In a survey held by Finished Vehicle Logistics magazine last year, most participating European car carriers were seen to have shed capacity, exhibiting an average 6% decrease over the previous two years. The exception was Groupe CAT, which had expanded its fleet dramatically thanks to a number of company acquisitions.

The company’s purchase of the Toquero Group in 2012, for example, added a large number of trucks to the company’s fleet on the Iberian Peninsula and in France, making it one of the largest for vehicle logistics on the continent.