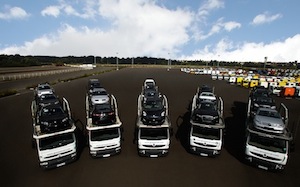 [Updated 24th February] Transport and logistics provider, Groupe CAT, has bought the German division of Wallenius Wilhelmsen Logistics (WWL) for an undisclosed sum. The business, which operated under the name Vehicle Services Europe, was a joint venture between the two logistics providers. Groupe CAT will now add three vehicle distribution compounds and a fleet of 370 transporters for passenger/commercial vehicles and high and heavy (H&H) equipment to its own business.

Warren has been tasked with leading the project team to oversee the integration of WWL Germany into Groupe CAT.

The company will take on an additional 400-strong workforce across seven different countries in Europe. Last year WWL Germany made an estimated turnover of €120m ($135m) and moved more than 600,000 vehicles and units of equipment in the new and used automotive sectors.

WWL will continue to operate the rest of its network and services in Europe, including ocean services, port and inland technical processing and supply chain solutions for the vehicle, equipment and breakbulk sectors, according to Kai Krass, COO of WWL. In January 2016, WWL upgraded its ocean service in Germany and increased the number of weekly vessel calls to the port of Bremerhaven.

“The acquisition of [WWL Germany] is the latest example of Groupe CAT’s commitment to invest in European and worldwide vehicle logistics services,” said Alejandro Forbes, CEO of Groupe CAT. “For us, it will further strengthen our position across the sector, and especially in Germany, which is Europe’s biggest new car market.”

Last year, sales of new cars in Germany hit 3.2m, up 5.6% on the previous year. According to figures from the VDA, the country produced 5.7m vehicles, and 4.4m were exported.

Combined with the WWL Germany business, Groupe CAT will be able to offer services in the new and used sector, including transport and logistics, forwarding, customs clearance, technical services, as well as storage and handling.

Along with giving Groupe CAT a stronger foothold in Germany, the takeover will open up new markets.

“We are also excited to be developing business where Groupe CAT is not yet present, including in such countries as Bulgaria and Azerbaijan, for example,” said Warren.

He added that the mix of countries and activities that WWL serves, combined with Groupe CAT’s existing business, would further deepen and diversify the company’s customer and activity mix.

“This is an enormous challenge and opportunity for Groupe CAT, to maximise the complementary strengths of the two companies,” said Warren. “I can already see areas of added value, and look forward to bringing the two teams together to work as one.”