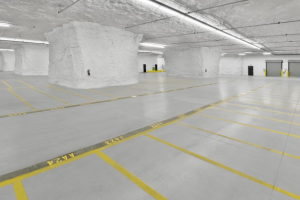 Spanish tier one parts supplier Grupo Antolin has leased over 3,000 sq.m of underground storage in Kansas City to improve the inbound supply of parts in the region to customers including Ford and GM.

The company supplies headliners for Ford’s F-150 model and Transit vans, made at the Claycomo plant in Missouri, as well as for GM’s Chevrolet Malibu, made at the Fairfax plant, along with other interior modules for both.

Following last year’s $16m investment in a 14,000 sq.m plant in the Kansas City Executive Park, it has now leased an additional 3,400 sq.m of warehousing at the SubTropolis business complex, a 4.5 sq.km underground storage facility reputed to be the world’s largest such complex.

Grupo Antolin’s logistics and supply chain systems manager, Steve Woodward, said the company chose SubTropolis because of factors including its location, the range of warehousing facilities there, its climate control, its security arrangements and the operational costs involved.

“SubTropolis’s proximity to both the Ford and GM plants in Kansas City was very attractive to us,” he said. “After operating for several months on a temporary basis in Automotive Alley, we knew we had found the ideal location for our growing regional warehouse operations and we look forward to adding to our presence in SubTropolis.”

Automotive Alley is an area both above and below SubTropolis owned by property developer Hunt Midwest.

Earlier this month Grupo Antolin opened a $37.6m plant in Huamantla, Mexico, its eighth facility in the country. It is supplying headliners, doors, pillars and seat backs for the new Audi Q5.