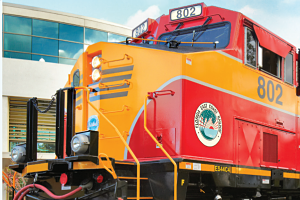 The diversified group, which already controls a large part of Mexico’s railway system, will use cash and debt to buy FEC from subsidiaries of the Fortress Investment Group.

FEC owns 565km of railways along the coast of East Florida and is the service provider to the ports of Miami, Everglades and Palm Beach.

It also provides intermodal services and handles at total of 550,000 loads per year. For the automotive sector FEC moves over 170,000 new automobiles per year to its auto transload facility located at Miami port's yard terminal. It also claims to have the capacity to connect with the 70% of the US network within four days.

“We are excited to welcome FEC to our transportation team as we work together to provide safe, reliable and efficient rail and trucking services to our customers,” said Alfredo Casar, CEO of the Grupo Mexico transport division.

Grupo Mexico's acquisition includes FEC assets and land as a whole, unlike Mexico where concessions are granted that grant rights of passage for a certain period of time.

“We will be able to offer our clients and will significantly improve the scope and scale of our services,” said the company in a statement.

Grupo Mexico’s transport division controls more than 10,000km of rail track covering major industrial and commercial zones in the country and connecting to international transportation networks through eight seaports and six border crossings. It also has existing operations in Texas.

Grupo Mexico counts Ferromex and Ferrosur amongst its subsidiaries and, along with Kansas City Southern and Ferrovalle, controls 72.3% of the railways in Mexico,

Recently the investigative arm of Mexico’s competition commission (COFECE) suggested there is a lack of competition in interconnection services by the major companies operating the country’s railway network.

This could lead to the Railway Regulatory Agency considering specific remedies, including imposing limited mandatory trackage rights on rail operators for specific commodities, routes or segments.