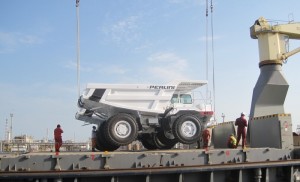 Russia’s high and heavy transport provider, GTE Logistics, has delivered four Perlini Equipment quarry trucks from Italy to Vladivostok in Russia’s Far East region. It is the first time that quarry trucks by made by Perlini have been delivered to the market in Russia.

The trucks, which weighed 35 tonnes together, were transported on subcontracted trailers by road from Perlini’s production facility near Verona to port Marghera in Venice. There they were loaded, together with their required loading equipment, on the combi freighter MV Beautriton, managed by UniSea Shipping. To reduce costs GTE chose to load them on a service that had been chartered by another shipper but had available space for the trucks. Two months later they were at the port of Vladivostok having avoided any reloading at transit ports.

The trucks then had to be disassembled by GTE Logistics engineers at customs to reduce the cost of import and transport. The parts were shipped by road from Vladivostok to Yakutia (Sakha Republic) where they were reassembled again and put into service at mining sites in the region.