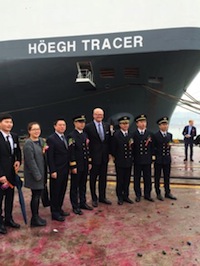 Höegh Autoliners has recently named the third vessel in its New Horizon class at a ceremony held at the Xiamen Shipbuilding Industries yard in China. The vessel was named Höegh Tracer by Hiromi Oe, wife of Akio Oe, President of Nissan Motor Car Carrier (NMCC).

The Höegh Tracer will be one of an eventual fleet of six Post-Panamax vessels under the New Horizon design. It took delivery of the first one, the Höegh Target, in June last year.

As with all the vessels in the New Horizon class, Höegh Tracer has a deck space of 71,400 sq.m and a carrying capacity of 8,500 car equivalent units, among the world’s largest pure car and truck carriers (PCTCs).

“It is with great pride that we today name the third New Horizon vessel,” said Steinar Løvdal, head of capacity management in Höegh Autoliners. “The first two New Horizon vessels, Höegh Target and Höegh Trigger [the second vessel delivered] are already a valuable addition to our fleet. With our focus on customer satisfaction, the added flexibility these vessels provide, enable us to offer an enhanced service offering to our customers.”

The vessel has a higher door opening than Höegh Autoliners’ current vessels, enabling cargo up to 6.5 metres high and 12 metres wide to be loaded, as well as extra ramp strength for cargo weighing up to 375 tonnes.

The Höegh Tracer, will begin its maiden voyage from East Asia to Europe in March, and will thereafter sail from Europe back to East Asia via Africa and Oceania.

In other news, Höegh Autoliners has announced this month that it was adding a new monthly service between Europe and Colombia.

“We see increased interest for the Latin American and Caribbean market amongst our customers and the added call to Cartagena is part of our growth ambitions in the region,” Per Christian Mørk, head of Region Europe.”

In January Höegh Autoliners and the Sola family, owners of SC Line and Fast Terminal International, signed an agreement planning to strengthen ro-ro and breakbulk services between USA, the Caribbean, Mexico, Panama, Colombia and Venezuela.