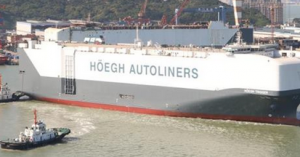 Following the delivery of its first post-panamax vessel in June this year, Höegh Autoliners has taken delivery of the second of six such car carriers that are being delivered over the next 18 months, in what the company is describing as its New Horizon class. It was built by Xiamen Shipbuilding Industries in China.

The Höegh Trigger has the capacity to carry 8,500 car equivalent units across 71,400 sq.m over 14 decks, which makes it one of the biggest pure car and truck carriers (PCTCs) in the world, alongside the Höegh Target. The vessels have 6.5 metres of free deck height and 12 metres of ramp width with the capacity to take cargo weighing up to 375 tonnes. The gross tonnage of the vessel is 77,000 metric tons.

The New Horizon vessels include a new hull design that combines high cargo capacity with low fuel consumption. It has been given DNV-GL’s class notification ‘CLEAN’ for its design. DNV GL is an international certification body and classification society.

The Höegh Trigger will sail on the East Asia to Europe trade route on her maiden voyage.