Höegh vessel returns to service after search for missing airliner 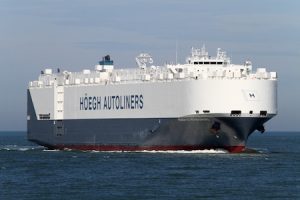 Ocean transport provider Höegh Autoliners has returned its car carrier vessel St Petersburg on its normal commercial route after a week spent assisting in the search for the Malaysian Airlines 370 passenger plane that went missing on 8 March this year.

The vessel was on its way from South Africa to Australia through the southern Indian Ocean when it was co-opted by the Australian Maritime Safety Authority (AMSA) to participate in the search for aircraft debris following sightings made by aircraft. The St Petersburg was the vessel closest to the search area when the sightings were made.

On 18 March the St Petersburg arrived in the search area, which is 2,500km southwest of Perth in Australia, and has maintained its search for seven days.

“Today’s search efforts have now been concluded and more vessels are now in the search area,” said the company in a statement (March 24). “Therefore, Höegh St Petersburg has been released from tasking by AMSA.”

The AMSA has reported that objects have been spotted in the area, which covers 60 nautical miles, by a Royal Australian Air Force P3 Orion aircraft. The HMAS Success is now attempting to locate the objects. Further aircraft are also being deployed in the area to assist in finding the objects.

Malaysia’s prime minister has announced that new satellite analysis shows that the aircraft went down in the southern Indian ocean and Malaysia Airlines has notified relatives of the 227 passengers on board flight MH370 that it had to assume “beyond reasonable doubt” that the plane was lost and that there were no survivors.