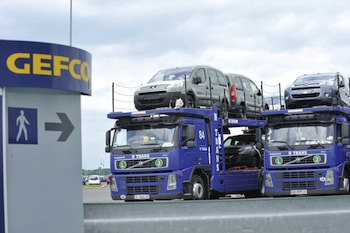 Members of the Association of European Vehicle Logistics (ECG) met last week in Athens, to discuss the current climate in Europe and the challenges faced across the industry. The importance of continued lobbying for harmonised loading lengths in car carriers was a key point of discussion, as was the slowly improving nature of car sales and therefore logistics across the European Union.

The lobbying campaign currently underway focuses on harmonising the weights and dimensions of loaded carriers to at least 20.75m. Antoine Redier, ECG's board member for EU Affairs (and 4PL director at Gefco), told the assembly how the ECG had also been campaigning for other issues such as cabotage, road charging and a fourth railway package, but that these concerns were on hold until after the May election.

The campaign has seen some success this year, having already passed in the European Parliament. The council of transport ministers across all 28 member states will next have to support the measure.

Where loaded lengths are concerned, Redier commented that Russia, Turkey and Ukraine were not included to make the focus completely EU-centric. “EU regulations are everywhere,” he said. “This is a body we have to live with and use to the maximum.”

Redier claimed that the current campaign remained the ECG’s number one priority: “We intend to continue our lobbying campaign on 20.75 harmonised loaded lengths. We will also follow future commission initiatives like optimising rail freight, emissions in maritime transport, and the internalisation of external costs in all modes vs road charging.” Redier added that it would continue to look at Eurovignette, the road user charge for heavy goods vehicles, as well as researching intelligent transport systems.”

“If nothing changes,” continued Antonissen, “all cross-border movements today could be restricted, as they could be considered in breach of current legislation” (if above 18.75m in length, 4m height, 40 tonnes). “As the European Commission wishes to increase enforcement by member states, a 'negative playing field' would be created.”

On the other hand, harmonisation would allow for improved load factors where trucks cross borders. “Drivers would also suffer less administrative burden,” said Antonissen. "Some countries in the EU are also more keen than others to adopt the ECG’s proposal, especially those centrally-located countries which already allow 20.75m [loaded length] on their national territory, such as Germany, Poland, Czech Republic and the Benelux."