Honda begins exports of Civic hatchback from UK to US 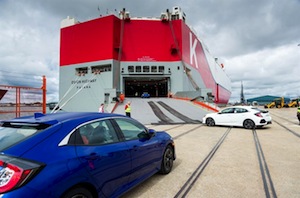 Honda’s division in the UK has started exports of the new generation Civic hatchback from its plant in Swindon to the US via the port of Southampton.

The Civic is due to arrive at dealers in the US by September this year via an ocean service provided by K-Line. Honda has also announced this week that it will start selling the Civic hatchback in Canada from this autumn.

The news follows Honda’s announcement last year that Honda of the UK Manufacturing (HUM) would become the global production hub for the tenth generation Civic hatchback.

Further details on the export volumes and schedule have yet to be confirmed but the Civic is Honda’s best selling model globally. Last year, it sold 300,000 Civics in the US, roughly 10% of which were the hatchback version.

Production of the European Civic hatchback starts later this year with sales beginning early next year.

Philip Webb, head of cars at Honda UK, commented: “Production of the hatchback for the UK market will commence towards the end of 2016, with sales beginning in the first quarter of 2017. Our factory in Swindon will also export the model to other key markets around Europe and the rest of the world.

Honda invested £200m in its Swindon plant to set up production of the new Civic hatchback, taking its total investment in the plant to £2.2 billion.

Last year, the carmaker announced that it was exporting the Civic Type R from the Swindon plant in the UK to Japan.