Honda cutting output at six plants because of US ports congestion 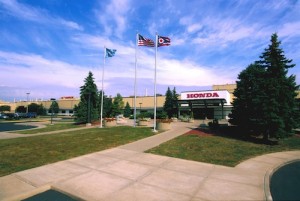 Following the news that the continuing dispute between dockworkers and port companies on the US West Coast has been affecting the inbound supply of parts to OEMs, Honda has confirmed that it is cutting output at six plants between the 16th and 23rd February as a direct result.

There are four plants affected in Ohio, as well as the Greensburg plant in Indiana, and Alliston in Ontario, Canada (see table below).

“Beginning Monday 16th February, we will experience parts shortages at our auto operations in Ohio, Indiana and Canada that will begin to impact regular production,” confirmed a spokesperson for the carmaker. “This is a fluid situation due to the uncertainty of the situation at the West Coast ports, but based on what we know now, we anticipate that each plant will need to adjust production on multiple days [between those dates],” he said.

The seven-month dispute, which is now affecting 29 ports on the US West Coast, is between the Pacific Maritime Association (PMA) and the International Longshore and Warehouse Union (ILWU) over renewal of contracts for port workers. It shows no sign of being resolved, despite the participation of the Federal Mediation and Conciliation Service. Major ports, including LA, Long Beach, Tacoma, Seattle and Oakland, are all affected.
The ports have been closed for four days since last Thursday as part of the on-going problems.

As reported last week, Toyota and Subaru have been airlifting parts into the US to avoid delays to production, and Honda has also now confirmed that it has been using expedited air shipments to avoid delays. Toyota has also been adjusting overtime schedules in response to the situation.