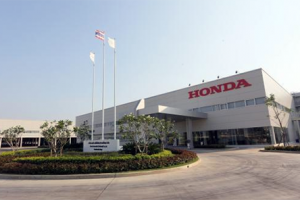 Honda has officially opened its new plant at the Rojana Industrial Park in Thailand, following the beginning of Civic assembly there in March this year.

The industrial park is in Prachinburi province, where the OEM has invested 17.15 billion bahts ($465m) in a 214,000 sq.m facility that will have an annual capacity of 120,000 vehicles destined for both domestic and export markets.

Along with the Civic, the carmaker said it was planning to make sub-compact and compact models at the plant in the future. Taken together with output at its other Thai plant in Ayutthaya, Honda's production total in Thailand will reach 420,000 vehicles.

“Thailand has increased its presence as one of Honda’s production hubs by supplying products and components not only for the home market but also for the world, including ASEAN nations which drive our global sales growth,” said Takahiro Hachigo, president, CEO and representative director of Honda Motor.

Honda started work on the new plant in 2013 and chose high ground in Prachinburi, having learned from the devastating floods in 2011 that forced the temporary closure of its Ayutthaya plant. There was a subsequent global impact on the supply of parts to its plants back then because of the effects on suppliers based around it in the Rojana industrial park.

Thailand's deputy prime minister, Dr Somkid Jatusripitak, attended the official opening of the new plant and said the Thai automobile industry was a major factor in the country's economic development.

“I am glad to see Honda is making Thailand a strategic production and export hub with the most advanced and environmentally responsible technologies,” he said. “It will enhance our country’s standing as an important global automobile production base.”