Honda shifts Accord hybrid production from US to Japan 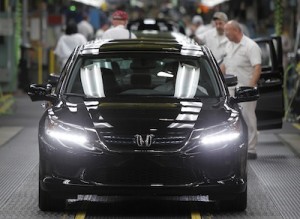 Amongst a number of changes to its North American production, American Honda has announced it is shifting assembly of the Accord hybrid from its US plant in Marysville, Ohio to the Sayama plant in Japan.

Models for the US market will now be exported from Japan.

In a statement the carmaker said the transfer of the Accord Hybrid from the Marysville plant to the Sayama plant would “better optimize [its] global production capabilities”, enabling Marysville to focus on making popular models, including the Honda Accord Sedan and Coupe, and the Acura TLX and ILX. Acura posted a month over month sales gain for March as trucks returned to set the pace for the luxury SUV segment. Honda said the Acura sedans were continuing to build momentum, led by the TLX and the redesigned ILX.

The company said it didn’t have any further details to share about the change in production. It did say that the move was part of its efforts on a customer-focused product strategy in North America by using the inbuilt flexibility its plants in the region had.

Last year, more than 97% of the Honda and Acura vehicles sold in the US were produced in North America.

Honda said it was also discontinuing production of the Honda Crosstour at the East Liberty Plant in Ohio this year. The carmaker said that the 2016 Honda HR-V, which launches shortly, would meet the demand.