Hurricane effect could keep US sales above 17m 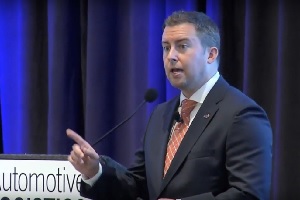 Replacement new vehicle purchases following the two hugely destructive hurricanes that hit the US recently could keep car sales above the 17m mark in 2017, despite previous forecasts showing they would fall below the figure for the first time in three years.

“For 2017 the initial sales forecast this quarter was 16.8m units. We could see that exceed 17m units now, largely driven by the impact of the hurricanes,” said Brandon Mason, automotive director and mobility leader at analyst firm PwC (pictured), at this year’s Automotive Logistics Global Conference in Detroit.

Mason produced figures of previous, post-hurricane monthly sales data in an attempt to shed some light on what may happen between now and the end of 2017, given the Harvey and Irma storms.

While Hurricane Katrina in 2005 remains the most expensive hurricane in the country’s history, total vehicles lost (used and new) in that catastrophic event were much lower than what could be over 1m in the wake of the most recent weather events.

Mason also explained that while Katrina seemed to have boosted second hand car sales at the time, with new vehicle sales actually falling post that hurricane, this time may be different.

Reasons include the fact that Houston, which bore the brunt of Hurricane Harvey, is the fifth largest metropolitan area with an extremely high car ownership rate of 95% of the population. The average household there is said to own an average of 1.8 vehicles, he added.

“So there is a huge collection of inventory there,” said Mason.

Nevertheless, while the scale of replacement because of the major amount of vehicles lost to Irma and Harvey is big, Mason said a decline in sales is still expected in 2017, down to 17m, after eight years of annual growth, peaking at 17.5m units last year.

He also warned that any economic recession in the country could result in sales falling even further to the 16-16.5m range but that the automotive industry was better prepared than before the global financial crisis in 2009 to handle a downturn.