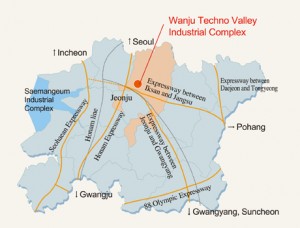 Automotive logistics provider Hyundai Glovis will open a parts export facility in South Korea in the first half of this year that will move truck and bus parts to Hyundai’s joint venture assembly plant with Sichuan Nanjun Automobile Group in Zinyang City, China.

The export facility in South Korea is located at the Wanju Techno Valley complex, 235km south of the capital Seoul, and near Hyundai’s Jeonju commercial vehicle plant. It will assemble and package complete knock down (CKD) kits for three models assembled at the plant in China: the Trago Xcient and Mighty trucks, as well as the County Bus. Hyundai Glovis said the kits will be made from 3,000 components supplied by 200 parts suppliers.

When full production is up and running, the plant will be able to export parts for 40,000 commercial vehicles, said the company.

The kits will be delivered just-in-time (JIT) and will be taken by ocean to China onward transport, by barge, up the Yangtze river.

The latest development builds on Glovis’ established business in sending car parts and kits to Hyundai and Kia plants in nine countries, from South Korean knock-down kit export plants in Ulsan and Asan.

Learn more about parts movements to China, amongst a wide range of other subjects, at the forthcoming Automotive Logistics China conference, which is being held in Beijing between the 15-17 April this year.