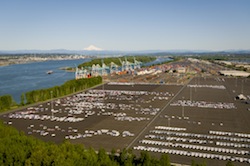 Hyundai has processed its 2 millionth vehicle through the US West Coast port of Portland in Oregon, 23 years after it first opened its automotive terminal there and 37 years since it began using Portland for Excel subcompact deliveries to the US. The port is now working with vehicle processor Auto Warehousing Company (AWC) on a $2.8m facility expansion to increase capacity.

“Hyundai’s volumes have grown over the past two decades, we have continued to grow with them,” said John Akre, terminal manager for the Port of Portland. “We have always had a great relationship with Hyundai and Glovis.”

The $2.8m expansion is already underway and will extend the processing building by 2,500 square metres, increasing capacity to more than 110,000 vehicles annually. Hyundai said it could double the 70 jobs already on site, and provide added work for rail, trucking, longshoremen (dockers) and Teamster workers.

A spokesperson for the port of Portland told Automotive Logistics that funding for the expansion will be supported by a grant from Connect Oregon IV, a wider state project that is directing $40m of transport funding designed to improve utilisation and efficiency of non-highway modes of transport in Oregon. AWC is also investing $560,000 in the project.

Portland processed more than 280,000 vehicles in 2012 and remains the second biggest vehicle processing port on the US West Coast behind San Diego in California http://www.automotivelogisticsmagazine.com/data/riding-the-waves). Along with Hyundai vehicles, Portland handles imports of Honda, Acura, Toyota, Lexus and Scion vehicles, and Ford started exporting to South Korea through Terminal 6 last year.

“Autos are a big part of the port’s recent history and will continue to be a part of our future plans,” said Portland’s spokesperson.