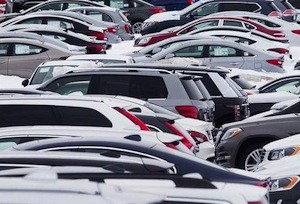 Winter conditions are continuing to hamper vehicle processing on the North American East Coast, with the latest snow storm burying vehicles at the Autoport facility in Dartmouth, Nova Scotia, operated by Canadian National Railway (CN), which handles European finished vehicle deliveries at the port of Halifax.

The harsh conditions, which have made it impossible to move vehicles out of the terminal, have led to onward shipment delays and a consequent back up that has meant incoming vessels have been unable to off-load volumes. Some of those volumes are reported to have been rerouted via the US ports of Baltimore and Davisville, from where they are being trucked back up to Canada.

“The North American East Coast has been hammered repeatedly this winter by heavy snow, cold and freezing rain that have seriously impaired normal operations at CN Autoport’s Dartmouth, N.S., facility,” confirmed CN’s spokesperson, Mark Hallman. “The latest challenge was last week’s big snow storm. A significant number of vehicles have been buried in ice and snow, making them impossible to move. As a domino, CN has found it difficult to off-load vessels. CN continues to accept vessels at Autoport, but has made clear to customers that there will be delays.”

This month CN has put force majeure measures into effect – the contractual provisos that cover unforeseeable circumstances – as a result of the weather problems.

Hallman told Automotive Logistics that CN was working to maintain the flow of traffic and the supply of vehicles into and out of the Dartmouth facility by securing incremental off-site storage capacity, as well as hiring temporary workers to help alleviate the backlog.

“Autoport is also prioritising vehicle shipments for loading not encumbered by ice and snow, to improve manpower and port efficiencies,” noted Hallman. “CN continues to bring in managers and Autoport has just implemented an afternoon loading shift.”

Despite these moves the facility remains above capacity and some vessel diversions have occurred.

A spokesperson for the port of Baltimore confirmed that it was receiving vehicles originally destined for Halifax as part of a short-term arrangement because of the adverse weather conditions. The port is expecting around 2,000 vehicles to be moved through he said, but did not confirm which brands were involved.

Adverse weather conditions have been a problem in the north eastern region of the US and Canada for a number of months now. As reported last November, weather was the main reason for a sudden drop in vehicle and inbound movements following a massive snowfall of more than seven foot in Buffalo, New York state.

The storm closed Ford’s stamping plant, which in turn meant there was a cut in supply to the carmaker’s Oakville assembly plant in Canada, which is served by CN.