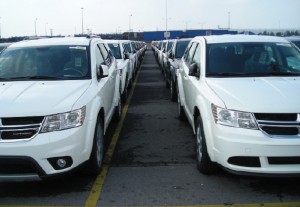 Fiat Chrysler Automobiles has chosen logistics management and IT provider ICL to manage its outbound vehicle operations across North America.

The contract, which will officially start in August this year, will see ICL coordinating and overseeing the transport of Chrysler, Jeep, Ram, Dodge, Fiat and Alpha Romeo vehicles to dealers and other customers in the US, Mexico and Canada. It also includes export volumes from North America.

ICL will also use its systems to provide visibility during transport and estimated times of arrival (ETA) information.

ICL is forming a new company to manage the business, for which it will recruit about 26 people. The company, which will be named shortly, expects to manage 3.2m vehicles in the first full year of operations. This will bring the annual number of vehicles ICL tracks for its customers in North America to 8m.

“While FCA will be using our system solutions for visibility, ETA and performance monitoring, we will also be responsible for managing the day-to-day operations of their network,” said Tom Swennes, vice-president of strategic planning and administration. “We will be working closely with FCA and their truck and rail transportation providers to coordinate and oversee the movement of vehicles from their manufacturing plants, and ports of entry to destinations across the US, Canada and Mexico.”

The new company will be managed by Christine Judd, who joined the ICL team in August 2012 as senior project development manager, supporting Porsche and Volkswagen, as well as managing the ICL development team.

In terms of its processes, ICL’s president Pat Donahoe explained that for both North American moves and those for exports around the world the company begins tracking each vehicle at time of the production order, providing ETA's at that point. Donohoe said that the business changes every year and that ‘change is the norm’.

“Something we do that I believe is unique is that even though we upgrade our system every year, we also start over and completely rewrite our systems every ten years,” said Donahoe, adding that automotive companies tend to build a system that often lasts 30 years or more and ends up being a mix of legacy systems and manual processes. ICL’s more regular overhaul allows it to use the latest technologies, according to Donohoe.

“We are in the middle of a total rewrite now. We will put in over 200,000 hours into this rewrite. It is expensive and we pay most of it out of our own pocket,” he noted.