ICO wins deal with Nissan for volumes through Zeebrugge

Nissan has signed a deal with NYK’s ro-ro stevedoring subsidiary, International Car Operators (ICO), that will see an additional 95,000 vehicles being processed through the port of Zeebrugge. Shipments started at the beginning of February. The volumes were previously processed through the French port of Le Havre. 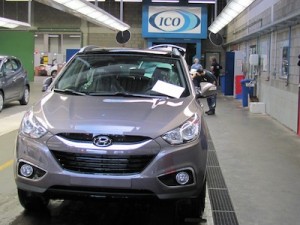 The vehicles will now be delivered by ocean forwarders European Marine Logistics (EML) from the carmaker’s Sunderland plant in the UK via the port of Newcastle. From Zeebrugge the cars will be distributed to France and the Benelux region. ICO will also be providing storage and pre-delivery inspection services.

“The new Nissan traffic will be concentrated on the Northern Inlet Dock in the inner port of Zeebrugge,” said Marc Adriansens, managing director of ICO. “At this location, ICO has recently put in use an ultra-modern, state-of-the-art PDI centre. This PDI centre is already being used for imported Dacias from Tangier (Morocco) and Renault cars from Spain.”

ICO has developed a processing system at Zeebrugge (and its terminal in the port of Antwerp) with German IT specialist Inform. The system, called E-Gate, instructs stevedores where to position the car at the port and tells road hauliers where to pick those vehicles up. It also shows which cars have gone for PDI and when.

“Before, we would receive a lot of calls or e-mails from customers,” said Adrensens. “If a car is on hold, the customer can see why. In addition, the time a truck spends in the terminal has declined by 50%. Efficiency is up by 5% overall.”