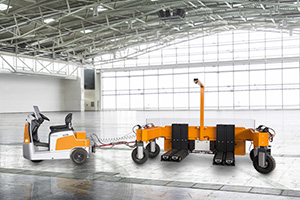 The winners of the the International Forklift Truck of the Year (IFOY) Awards were announced on the opening night of this year's Transport Logistics trade show in Munich, Germany, this week at a special event held at BMW Welt, the carmaker's customer centre.

This year, 11 machines from seven manufacturers made it into the final round following a six-month selection and testing process. There were three eventual winners in the four categories making up the awards with Still taking two of them and Jungheinrich and Torwegge one each.

The first award for Still was in recognition of its iGo neo CX 20 order picker in the Warehouse Truck category. It is the first autonomous horizontal order picker and according to the jury it represented “a milestone in the development of autonomous materials handling equipment [and closed] the gap between robotics and intralogistics”. Intralogistics is the term given to integration, automation and management of the flow of materials in a distribution centre.

In the tests leading up to the IFOY prize, the iGo neo CX 20 was seen to boost operational efficiency by 47%, according to the organisers of the event.

The second IFOY award given to Still was in the Special Vehicle category for its heavy duty tugger train, the Liftrunner (pictured), which facilitates automatic loading and unloading. The train was designed specifically to supply components to the production process for a UK construction machine maker.

According to the jury it not only extended the range of applications for tugger trains but also had “self-evident advantages in view of the increasing average age of people employed in logistics, as the physical performance capability of the operator is no longer relevant”.

Torwegge took the award for the Automated Guided Vehicle (AGV)/Shuttle category for its TORsten multi-directional heavy duty vehicle, which can move loads of up to 7.5 tonnes. The TORsten uses different load carriers fitted with matching shelves or containers to meet customer specifications and was developed in close cooperation with mechanical engineering company Sew Eurodrive and the University of Aachen.

The fourth award went to Jungheinrich for its Indoor Positioning system which the jury said was a “must-have” in the Special of the Year category. The localisation system for warehouse trucks is based on smartphones, beacons and Bluetooth, and was singled out for its “outstanding customer benefit and high market relevance”.

The jury added that “the concept [was] not only suitable for vehicle types from different manufacturers but [could] also be implemented flexibly, rapidly and at low cost”.

An important consideration in the selection process at the IFOY Awards is the current trend for automation and data exchange in manufacturing technologies, otherwise known as industry 4.0.

"Industry 4.0 is fast becoming part and parcel of intralogistics,” said Anita Würmser, executive chairperson of the IFOY jury. “This is an area in which the winners have showcased innovations that not only promise but also measurably supply quantum leaps in terms of customer benefit."

The IFOY Awards have been running since 2013 to promote cost efficiency and innovation in the logistics industry. The awards scheme is sponsored by the VDMA Materials Handling and Logistics Systems Sector Association.