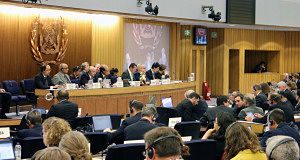 The International Maritime Organization (IMO) has officially approved more stringent global sulphur emission requirements that must be in place by the end of the decade.

The news is very significant for the world automotive industry, which relies heavily on the global ro-ro shipping fleet to move finished vehicles to markets around the world and on the container shipping industry for moving automotive materials on their way to production lines.

According to Hesnes Shipping research, the world’s overall car transport fleet (minimum capacity of 2,000 vehicles) consisted of more than 700 ships by the start of 2016, with a capacity of circa 4m vehicles.

Market leader NYK estimates 14.8m cars will be transported worldwide this year, rising to 16m by the time the sulphur cap comes into force.

Ships can meet the new requirement by using low-sulphur compliant fuel oil, gas or even methanol in some cases. Alternatively, ships may use approved equivalent methods, such as exhaust gas cleaning systems or ‘scrubbers’.

There has already been a more stringent cap of 0.1% mass/mass since the start of 2015 in the SOx Emission Control Areas (SECAs), which include the Baltic Sea and North Sea areas in Europe, and the North American sea areas around the US and Canada.

Several car carriers have already begun to make the adjustments necessary for the new requirements. Wallenius Wilhelmsen Logistics introduced a new sulphur policy governing the emissions from its ocean vessels earlier this year, limiting the sulphur content of its fuel when at berth to less than 0.1% across all ports visited globally. The company is using scrubber technology, to remove the level of pollution.

The 2020 deadline for the global cap had been earmarked since 2008 when certain amendments were adopted by the IMO, although there was potential for it to be extended to 2025 depending on a review assessing the availability of compliant fuel oil to meet the date. That review, completed this year, concluded that sufficient compliant fuel oil would be available to meet the earlier deadline – although there have been some concerns raised about this.

To look into the potential for shortages, IMO commissioned a report by research firm CE Delft which concluded that the refinery sector could produce sufficient amounts of maritime fuels with a sulphur content of 0.50% m/m or less to meet demand, while at the same time producing fuels for other sectors of the required quality.

Bimco, the world’s largest shipping organisation, said it “respected” the decision of the MEPC but also “noted concerns by a number of IMO member states about the availability of fuel oil in some regions”.

“Bimco recognises that the global sulphur cap implementation is about transition and would have been equally challenging either in 2020 or 2025. The transitional issues have been highlighted and we continue to hold the view that this will not be a ‘walk in the park’. The decision by the MEPC does not change this view,” said Lars Robert Pedersen, deputy secretary general.

Mandatory consumption dataIn another decision at last week’s summit, the IMO ruled that ships with gross tonnage of 5,000 tonnes and more would be required to collect consumption data for each type of fuel used. It is estimated that ships of this scale account for 85% of CO2 emissions from the shipping industry.

IMO’s secretary general, Kitack Lim, said: “The data collection system will equip IMO with concrete data to help it make the right decisions, as well as enhancing its credentials as the best placed and most competent forum for regulating international shipping.”

Under the new data collection system, aggregated data will be reported to a ship’s flag state after the end of each calendar year, which will in turn transfer the data to the IMO Ship Fuel Oil Consumption Database. An annual report will summarise the data collected. Individual ship data will be kept confidential.