Imports to China grow but tax policy is a concern 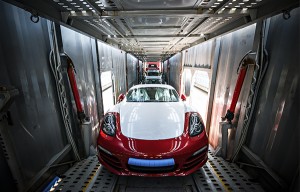 Imported vehicles to China have shown a growth in sales of 13% in the first quarter of 2014, according to the Association of Vehicle Importers and Distributors (AVID). The first two months of the year also saw vehicle imports to the country surge by 50%, led by high-end vehicles with larger engines, including those from Audi, BMW, Land Rover and Mercedes-Benz.

However, delegates at this year’s Automotive Logistics China conference in Beijing learned that there are a number of policy changes on the horizon that could have an impact on these import movements, with a rumoured revision to China’s tax policy on the import of premium vehicles just one causing unease. There has been speculation for around a year that China will launch a 20% levy on vehicles selling for more than 1.7m yuan RMB ($270,000).

“We are very much concerned about the tax policy,” said Wu Songquan, analyst at the China Automotive Technology and Research Centre (CATARC), speaking during the CFLP Import/Export Day at the conference. “I have traced these policies over the last ten years and right now we are trying to forecast what is going on regarding policy on imported vehicles. Tax policy will have a direct impact on the imported vehicle market.”

CATARC is a technical administration and support organisation to the Chinese government.

While no date has been fixed on the introduction of the policy, a change in tax would be significant considering its impact on import prices. Although the top ten vehicle imports to China are in the premium segment, high-end imports cost significantly more than Western markets thanks to customs and duties. For imported cars with engines over 4 litres, prices already double after tax, for example.

Wu’s concerns were shared by Qin Meng, senior manager at Porsche. “This [tax] would have a huge impact on our future practice,” she said. “If there is a specific timetable for the implementation of this policy we will have to make some changes to our logistics business model.”

With no clear sign about when (or if) the policy would be launched, carmakers are left with some uncertainty about any logistics contingencies they will have to make.

Vehicles with thirsty engines could also face costs associated with Chinese government’s policy on fuel efficiency, according to Wu.

On May 1st last year regulations on fuel efficiency were put into force in China, although imported cars are currently protected. However, makers of those cars will have to comply with the forthcoming reduction in fuel efficiency to a new target of 5-litre p/100km.

“Statistics on fuel efficiency by carmakers released by the Ministry of Information and Industry cover some major importers,” said Wu, “including Chrysler, Ferrari, Maserati and Austin Martin, which export vehicles [to China] that exceed the fuel efficiency targets. They could face some penalties.”

Possible FTA hope
However, it is not all about potential increases. There are negotiations currently being held on a number of free trade agreements that could see custom tariffs reduced from the current 25% set between World Trade Organisation member states, down to almost zero.

“China is engaged in discussions with Japan and South Korea, Australia, New Zealand and Norway,” said Wu. “They are trying to establish a free trade zone.

“The target is that by the end of 2015 a new economic relationship can be established between China and these target countries,” he continued. “Also, China is trying to establish an upgraded version of its free trade agreement with ASEAN [the Association of Southeast Asian Nations] countries. All these negotiations will have a big impact on the changes to the custom tariff on imports.”

Furthermore, China-based carmakers exporting to the ASEAN countries are hoping the negotiations will lower import taxes, which are currently set high.

“In future, closer integration is likely,” said Wu. “The tax level is likely to be lowered except where there are protected industries. Our cars exported to those countries should get relief on this tax burden.”