[Updated 3rd March] Indian Railways has inaugurated its first common user finished vehicle rail hub at Walajabad station, in Chennai in the south of India, close to a cluster of assembly plants. The hub is part of the Indian government’s plan to increase the movement of vehicles by rail in India substantially over the next decade.

According to information distributed by the Press Information Bureau of the Indian Government, the Walajabad hub is 5,000 sq.m large, and will have loading capacity of 300 vehicles. The centre it located close to plants that include Renault Nissan, Hyundai Motor and Ford, with access to the ports of Chennai and Ennore for export flows. The hub is also touted as regional distribution centre for receiving brands such as Honda and Tata built in the north of the country. 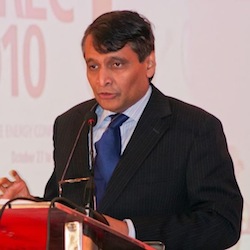 Suresh Prabhu, India’s railway minister (pictured), who inaugurated the centre by video link, said that the Chennai site was only a first step in the development. He also highlighted the importance of working across vehicle brands. “Indian Railways is further working on how to get more auto transportation into the railway track,” he said. “Railways cannot rely upon only one business partner and this is the way to do business and thus reach to cargo is essential to generate/increased freight revenue.”

According to Indian Railways, only around 4% of vehicle traffic is transported through Indian Railways, resulting in about Rs. 100 crore annual revenue. The railways target is to increase its share to 20% by 2026.

The rail hub is part of a set of reform by the Indian Railways in recent years to capture a larger share of finished vehicle and overall freight volumes by rail. In recent years, the government had also allowed some operators to invest and operate specialised equipment.

Inadequate infrastructureThe opening of the centre comes shortly after an extensive rail budget presentation to the Indian government last week in which Prabhu first announced that the railways would soon open its first automotive rail hub.

The minister said that an inadequacy of warehousing and transport facilities on the state-owned Indian Railways was one of the reasons potential customers had stayed away from rail as a mode of transport. As part of wider plans for a rapid expansion of rail freight business, Prabu said the logistics parks and warehouses needed, including those for the automotive industry, would be developed through public-private partnerships, though there is currently no indication of what private investors are involved in Walajabad.

“With the coming in of Transloc – the Transport Logistics Company of India – we will be witness to a paradigm shift in our role as a national logistics provider,” said Prabu. Transloc was first announced in last year’s rail budget as a means for Indian Railways to enter the fast growing logistics sector and keep pace with the industry.

“The focus will be on providing last mile connectivity for freight business and significant reduction in logistic costs,” said Prabu. “At least ten goods sheds will be developed by Transloc in 2016-17. To capture the automobile traffic, we will soon inaugurate India’s first rail auto hub in Chennai.”

Private investmentThe liberalisation of India’s automotive rail policy in recent years has allowed foreign investment and private management of some services. For instance, APL Logistics Vascor Automotive, a joint venture between APL Logistics and Vascor, has already invested in developing its own own hub in Chennai, providing services that include storage, value added activities to distribution, in a secure and monitored facility. It has two further facilities in Delhi and Guwahati. APLL Vascor Automotive is not currently involved as a private partner in the new hub planned by Indian Railways but Umesh Bhanot? managing director of the company told Automotive Logistics that it welcomed the development and was waiting for Indian Railways to disclose further details on the public private partnership.

Asked about that development Bhanot pointed to the review of freight policies promised by Prabu in the forthcoming financial year.

“We hope the review produces a sustainable policy on moving more vehicles via rail, given India’s fast growing economy and vehicle ownership trend,” said Bhanot. This would alleviate strain on road infrastructure and the environment. A supportive and more flexible railway freight rate policy would go a long way to make this happen.”

That review could also address some of the criticisms Bhanot outlined in December last year when he told Automotive Logistics that the steep rail freight rates, which are set by Indian Railways, did not make such services highly attractive. Indeed, he questioned why rates were so high given that diesel prices had decreased by 24% during 2015.

APLL Vascor Automotive has also invested in the development of specially designed bi-level rail wagons, which are now in service, transporting cars between Chennai and both Delhi and Guwahati.

Investment in rakes is also something Indian’s biggest carmaker Maruti Suzuki, has done and is currently running services from its plants in Delhi southbound.

Indian Railways, itself, has also invested in new equipment. In March last year, the port of Chennai became the first port in the south of the country to receive automotive traffic moved by a rake of New Modified Goods (NMG) car transporters operated by Indian Railways. NMGs are single-decker auto carriers that have been built from old passenger rail coaches.

Kintetsu Worldwide Express (KWE), which bought out APL Logistics last year, has been investing in automotive logistics facilities in the Chennair area. In January this year it opened a material and parts warehouse in the northern area of Chennai, which the company had good access to the Chennai city area and also to the Sri city area in Andhra Pradesh state, to where many Japanese companies had moved.

“It is also a location that is suitable as a delivery base for all of India,” said KWE in a statement, adding that the wide range of services from the site included those by rail.

Rail freight corridorsAccording to minister Prabu, part of the strategy for expanding rail services in India is building more dedicated freight corridors. Currently, construction is ongoing for an eastern corridor from Ludhiana to Dankuni, and a western Corridor from Dadri to Jawaharlal Nehru Port in Mumbai, which are expected to be completed by 2019. There are also plans for a north-south connection between Delhi and Chennai.

“It is proposed to put these three projects on high priority to ensure structuring, award and implementation in a time-bound manner through innovative financing mechanisms, including PPP,” said Prabu.

Those dedicated freight corridors, which would work on a time table, are something else welcomed by Bhanot.

“Dedicated freight corridors would give automotive movement by rail a real shot in the arm by making for faster transits and, more importantly, the use of bigger and more efficient rail cars.”

These freight corridor plans were under discussion at the Automotive Logistics India conference in Delhi, held in December last year. The freight corridors are being built on a completely separate grade down the west and east of the country, with building already under way; private investment and ownership of rail wagons has also increased activity in automotive rail. They promise significantly greater capacity and an increase in speed, meaning components and containerised finished vehicles will be able to move faster around the country.

Speaking at the conference Hari Das Gujrati, director of operations and business development at the Dedicated Freight Corridor Corporation of India, the western Corridor will focus on container traffic. In its first phase it will run alongside the existing line on a 963km route between Rewan and Vadodara, on which double stacked trains 1,500 metres in length will be able to travel 100kmph, or 25kmph faster than they are allowed to run today. The average speed is likely to increase to 70kmph from the current 26kmph average. Eventually the western corridor will stretch 1,520km (read more here).

Marcus Williams and Christopher Ludwig contributed to this report