The Indian port of Mumbai has reduced vessel-related charges for ro-ro traffic by around 10%, in an effort to encourage the coastal movement of vehicles and to meet OEM and vessel operator demand. The reduced charges will stay in place for a year from June 1st this year.

In a statement issued last week, the Mumbai Port Trust outlined a list of vehicle categories and their corresponding wharfage rates:

“The reduction in wharfage will encourage movement of domestic cars/trucks from the manufacturing places such as Chennai, etc. to Mumbai, and similarly from Pune/Nashnik to southern and eastern parts of India,” said Mumbai Port Trust in its statement. The Trust went on to say the movement of vehicles on those routes currently went by road, and that the switch to short sea coast routes would reduce congestion, cost and environmental impact, as well as facilitating faster movement for those vehicles meant for export. 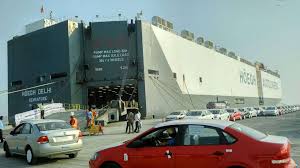 So far carmakers have yet to respond to the announcement, but there has been a recent spate of OEMs switching to short sea coastal services. Back in February, Hyundai started using a new short sea coastal service set up by Link Shipping and Management Systems for the transport of vehicles in India between the ports of Chennai on the south east coast, and Pipavav on the north west. However, as reported then, high port fees were dissuading more shipping lines from entering the Indian finished vehicles cabotage market, according to Mandeep S Tiwana, owner of the IDM Symex, the ro-ro vessel that moved the vehicles in the first week of February.

Hyundai later revealed that it was exploring further options to move cars north by sea to the east of the country, from its Chennai car plant, to the city of Kolkata, along with similar routes along the west coast.

Maruti, is also understood to be looking into a short sea option for cars built in Gurgaon and Manesar, which would be shipped to Kolkata along the river Ganga.