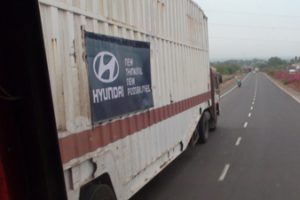 India’s Ministry of Road Transport and Highways has finalised new rules on what constitutes a legal car carrier in the country.

The new Central Motor Vehicle Rules (CMVR) 2016 legislate that, from April 1st 2017, car carriers will be limited in length to 18.75 metres while trailers – the majority of which are enclosed in India ­– will need to be fitted with a sliding inspection window no smaller than 400x300mm to allow verification of their loads.

The rules also call for speed limiters restricting such trucks to a maximum of 60kph; and for the use of rear-facing camera systems.

Although the final decree only takes effect from April, some Indian states, such as the northern state of Rajasthan, had already begun levying fines on non-compliant trucks.

State officials there have been imposing penalties of 5,000 rupees ($75) on carriers that do not conform to the incoming law. Following talks between Rajasthan’s transport department and the Car Carriers Association, which represents the majority of India’s car carriers, however, it has been agreed that these penalties will be scaled down until the new law actually comes into effect.

Of the 13,000 finished vehicle carriers estimated to be on the road in India, almost three-quarters are believed to exceed 18.75 metres in length, many of them reaching 22 metres or more. This is in part due to pressure from vehicle makers to carry more vehicles per trip.

Up until now, Indian law has not specified any national maximum length for car transporters – something that has led to widespread fines and a culture of bribery across different states with their own varying rules.

Although the new national restriction is now set in stone and officials in Rajasthan have agreed to scale down any fines until it comes into effect, there is no guarantee that similar situations will not flare up elsewhere, ahead of the official decree date next April.

India's car carrier sector will be a focus for discussion at next month's Automotive Logistics India conference in Gurgaon, near Delhi