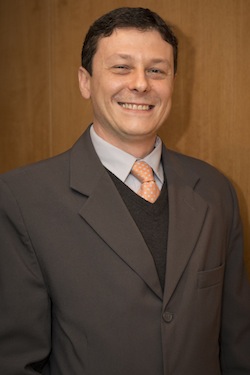 It is with great sadness that Automotive Logistics has learned of the death of Frederico Roldan, General Motors’ supply chain director for South America and a long-time executive in logistics roles. Roldan died suddenly on July 21st, aged 46.

Roldan had over 20 years’ automotive experience with GM, working in materials management, purchasing, logistics and supply chain. He was most recently responsible for supplier management and delivery across plants in South America. Prior to that, he held roles overseeing logistics more generally in the region.

He was a well-known and well-respected figure within General Motors and across the wider logistics industry in Brazil and South America. Apart from his time in Brazil, Roldan spent three years working for the company in the US, based in Detroit. He also worked closely in South America with fellow Brazilian Edgard Pezzo, who is today executive director for the carmaker’s global logistics organisation and was previously vice-president of global purchasing and supply chain for GM South America.

“GM deeply regrets the loss of a great professional,” said Marcos Munhoz, vice-president of GM do Brasil. “Fred Roldan was a young and energetic executive who made an important contribution to the company in his short career. His life was taken very early but he enjoyed every moment of it. Our condolences to his family and friends.”

Roldan was also a valued source of industry knowledge, making regular contributions over the past seven years to articles in this publication and speaking at the Automotive Logistics South America conferences.

In his most recent appearance at the conference in November 2015, he emphasised the importance of improving supplier relations and seeking innovations, both from those within GM and across its supply base. To achieve that, Roldan revealed, he had encouraged his supply chain teams to increase cross-functional visits across GM’s supply sites, including 96 visits in a 45-day stretch. Examples of the ideas that emerged include shifting some specialised packaging into standard containers and pallets to reduce freight and in some cases also improve stacking.

“Some ideas I find wonderful,” Roldan told delegates at the event. “They’re not from the meeting room or the management – they’re from people who put the loads on the trucks, for example.”

A video of his speech at the conference can be viewed here.

A close colleague, an expert, a friendRoldan’s message on working more closely with colleagues and suppliers, especially during a period of economic difficulty in Brazil, was emblematic of Roldan himself, who had a reputation for openness and partnership.

“In the seven years that I have known Fred Roldan, he has been a great contributor to our magazines and conferences,” said Louis Yiakoumi, group publisher and conference director at Automotive Logistics. “He was a highly respected supply chain expert and played an important role in the logistics group at Anfavea [the Brazilian association of vehicle makers] and other supply chain groups.”

“Fred played an important part in the development of Automotive Logistics South America, always making interesting, honest and thought-provoking presentations,” said Yiakoumi. “He was always one of the most popular speakers at our events and an active supporter and advisor. That is why whenever I made a trip to Brazil, he was always top of my list of people to meet and also, more importantly, how he became a friend.

“He was always pleased to see me however busy he was – in the office or, if time was short, grabbing a quick coffee – and always smiling, however tough business could be, even if his soccer team was not doing so well. He never complained if I was a bit late or flouted protocol by forgetting to bring my passport when trying to enter the plant.

“I have always felt honoured and lucky to be a part of the automotive logistics industry because of the great people in it – and Fred Roldan was one of the best,” he concluded.