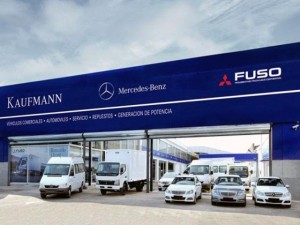 Inform, which supplies advanced optimisation software, has won a contract to supply its SyncroTESS finished vehicle logistics suite to automotive group Kaufmann, which imports and sells vehicles in Chile. Alongside passenger cars, Kaufmann handles a third of the commercial vehicles sold in the country, with customers including Freightliner, Fuso, Western Star and Mercedes trucks.

Using Inform’s technology Kaufmann will now plan and manage all its service offerings, including storage, damage inspections and extensive technical services, such as pre delivery inspection (PDI) and post production conversion of trucks needed for the Chilean market. The company will use SyncroTESS at its faclity in Santiago de Chile and all its branches and dealers through the country will have access to the system. Inform said there are plans to integrate external companies via web portals/API for transport management.

In terms of commercial vehicle delivery to Chile, basic truck chassis are imported from the OEMs and on arrival adapted for specific applications according to customer requirements and industrial sector.

The SyncroTESS software splits up the customer order into individual tasks, such as storage, movements, inspections and production order, and then calculates the best sequence in which all tasks for all the vehicles should be carried out, including services offered by external partner companies. It also assigns or orders tasks to the appropriate resources, internally or externally, and tracks its progress.

According to a statement from Inform, Kaufmann’s overall objectives with the project are to gain greater visibility for itself and its customers, strengthen its competitiveness by increased efficiency and assure customer satisfaction.