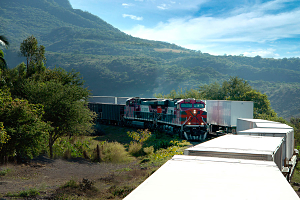 The investigative arm of Mexico’s competition commission (COFECE) has suggested there is a lack of competition in interconnection services by the major companies operating the country’s railway network.

The unit has just released the preliminary findings of an investigation into the matter following a claim by an unnamed party last year.

Kansas City Southern Mexico (KCSM), one of the three railway operators named in the findings, has already denied the allegations and says it will soon provide evidence to the contrary.

“KCSM respectfully disagrees with the commission’s reasoning and preliminary conclusions, and will exercise its rights within the next 20 business days to file evidence and arguments to support its position, as provided in the Mexican Federal Economic Competition Statute,” it stated.

The company, along with Grupo Mexico and Ferrovalle, controls 72.3% of the railways in Mexico, according to COFECE.

In an interview with Automotive Logistics, Carlos Mena, head of COFECE’s investigative unit, said the railway companies had already provided a fair amount of information to the investigation.

“During the investigation, we asked for information from all the interested parties; a lot of our findings are based on the data they provided,” Mena confirmed.

COFECE claims the lack of competition has resulted in “an increase of fees, excessive freight transportation times, higher logistics costs and interconnection services being underused”.

Railways are a major transport mode for finished vehicles and automotive parts inside, to and from Mexico.

Mena said: “We have found evidence in our investigation that [car companies] would be willing to use the rail even more, but the problem is an issue of cost and an issue of logistics.”

He said evidence showed a lack of trackage rights (giving one rail operator the right to use another’s line) meant that in some cases, trains had to stop at the intersection of one network and another for as long as a week.

“I believe establishing trackage rights will eventually help the logistical chain for the automotive industry, its growth and especially its interconnection with the US and Canadian markets,” he stated.

A report last year on Mexico’s railway system by the OECD and the International Transport Forum also noted the lack of regulatory authority in the past.

“Overall the system has worked well but a deficit in regulatory capacity in government has proved an obstacle to settling disputes over the use of trackage rights and, in some markets, disputes over the access conditions for certain shippers,” said the report.

Two years ago, an amendment to the railway law, required the creation by the Ministry of Transport and Communication of a regulator for the sector.

"The new agency will have the power to issue official Mexican standards, manuals and guidelines, as well as executing concession processes," said the Ministry in a press release at the time.

One of the remedies, according to Mena, is for this railroad regulator – the Railway Regulatory Agency – to establish trackage rights between the concession holders on the lines.

“This is a new way of creating competition and I think it is a great opportunity for regulators to intervene and create competitive markets,” he said.

The commission has up to 110 days to issue its final report on the investigation but Mena said it could be published in as little as a month.

Following the final report, the Railway Regulatory Agency will consider specific remedies, including imposing limited mandatory trackage rights on rail operators for specific commodities, routes or segments. The regulator may also impose the service conditions and rates that apply to these.