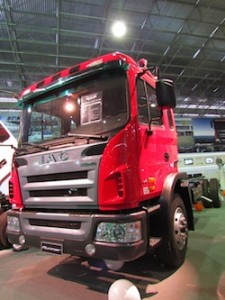 More than 5,000 of the trucks will be delivered over the course of the next year, with the first consignment expected to arrive in Venezuela before the end of August. The deal is reported to be the biggest heavy truck order for a Chinese vehicle maker in recent years. It was signed by subsidiary JAC Motor (Hong Kong) at the closing ceremony of the 13th Meeting of the China-Venezuela High-level Mixed Committee in July.

The trucks will be shipped to Venezuela’s port of Cabello for Corpovex, which will prepay 50% of the total contract amount ($136.9m), with the remaining funds paid according to the agreement. The units will be shipped as kits for assembly at the APL production line, which began assembly in July this year.

At the end of the July JAC shipped 50 Euro IV-compliant heavy-duty trucks to Iran for the first time. The vehicles arrived in Bandar Abbas on July 28 aboard a Glovis vessel.

The Chinese vehicle maker has also launched sales of a compact SUV – the S5 – and an N-Series light-duty truck in St. Petersburg, Russia. Last December the company said assembly of S5 from complete knockdown (CKD) kits could be soon established at the Derways enterprise in the Russian Republic of Karachay-Cherkessia.