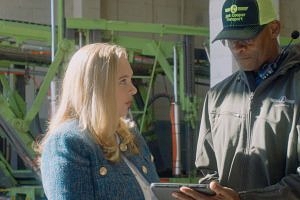 Sarah Riggs Amico (pictured, left), executive chair at trucking and logistics group, Jack Cooper Holdings, has announced her decision to run for lieutenant governor of the state of Georgia, USA, as a democrat. The position, also referred to as vice-governor, involves being the deputy or lieutenant to or ranking under the state’s governor.

Amico holds an MBA from Harvard and has previously held positions as head of M&A and executive chair at group company Jack Cooper Transport & Logistics.

As executive chair, Amico oversees the company’s board, strategy, M&A and human capital development, according to the company’s website.

“In the midst of the 2008 financial crisis, our family bought a struggling carhaul company near bankruptcy. Through the financial crisis – and the bankruptcies of two of our major customers – we grew from 120 employees in 2008 to over 3,000 employees now. We buy and fix businesses that most people think aren’t ‘fixable’,” said Amico on her campaign website.

Prior to joining Jack Cooper, she worked as head of strategic planning at APA Talent and Literary Agency in Beverly Hills, where she also launched and led the company's Entertainment Marketing & Brand Integration Department.

The Riggs family owns a majority in holding company Jack Cooper Enterprises, and Michael Riggs, Amico’s father, is the CEO.

“Like a lot of folks, I haven’t always been thrilled with what political parties have done to our country and I’ve voted for the person I thought was best, regardless of party. But when the Republicans started restricting opportunity instead of expanding it, cutting education instead of investing in it and abandoning civil rights instead of protecting them, it left me behind. Now I’m a proud Democrat,” said Amico.

The election will take place in November next year.