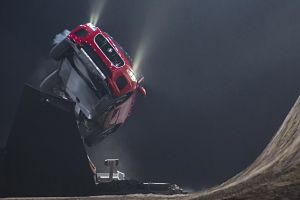 As part of the launch, a stunt driver completed a world-record barrel-roll jump over 15.3m

Jaguar Land Rover (JLR) has said its new Jaguar E-Pace compact SUV, launched on Thursday, will be produced in Austria and China – making it the first of its cars not to be manufactured in its traditional home of the UK.

The company, owned by India’s Tata Motors, has contracted the Magna Steyr plant in Austria to build the new model, with the Chery JLR JV plant in Changshu assigned to build the version for the Chinese market. JLR said it did not have the capacity to build it at home.

“The UK is the heart and soul of our manufacturing, design and engineering capabilities,” said Wolfgang Stadler, executive director of manufacturing at JLR. “However, with our UK facilities operating close to capacity, our contract manufacturing partnership with Magna Steyr and our joint venture in China provide additional volume, agility and flexibility to deliver the new Jaguar E-Pace alongside our other exciting vehicle launches this year.”

[related_topics align="right" border="yes"]In Austria, production will start in late 2017, while the all-electric I-Pace model will also be built there from next year, according to the company.

The bigger F-Pace SUV, launched earlier this year, has sold 80,000 vehicles, making it the fastest selling Jaguar in the company’s history.

The company pointed out that it had invested more than £12 billion ($15.5 billion) in the UK for new product creation and capital expenditure. At its engine plant in the country, it has doubled its investment to almost £1 billion – making it the largest injection into a new British manufacturing plant in decades, creating several hundred new jobs.

Its UK vehicle manufacturing facilities at Castle Bromwich, Halewood and Solihull have all been upgraded to support the introduction of vehicles such as the F-Pace, Range Rover Velar and new Land Rover Discovery.

JLR has employed more than 22,000 extra staff in the UK over the past five years, taking its workforce to more than 42,000 in the country.

JLR confirmed plans for its first overseas manufacturing plant in 2012 when it signed a joint venture agreement with Chery Automobile Company in China.

Since then, it has started production of the Range Rover Evoque, Land Rover Discovery Sport and Jaguar XFL in China. It has also opened a plant in Brazil and is progressing with the construction of its new manufacturing plant in Slovakia.