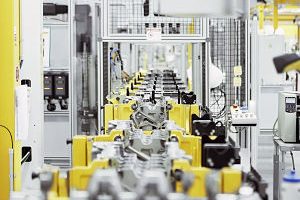 Jaguar Land Rover (JLR) has had two semi-trailers loaded with engines stolen from its manufacturing plant in Solihull, UK.

“We can confirm that we are working closely with West Midlands police to investigate the theft of engines from the Solihull manufacturing plant,” said a company spokesperson.

A statement from the West Midlands Police said the vehicles were believed to have been stolen sometime between late evening on January 31st and the early hours of the next morning.

“An articulated truck is believed to have entered the site twice, each time hooking up to trailers carrying the engines and then leaving again through the gate,” said the police statement.

The empty trailers have since been located and seized by police.

Local newspaper the Coventry Telegraph cited sources claiming the criminals obtained paperwork from the site before leaving. One of its sources told the paper: “They just hooked up the trailers. They were in and out in just six minutes with the first theft. The whole place is in uproar about it.”

Another local publication, the Birmingham Mail, said the engines were worth £3m ($3.7m).

JLR would not confirm the details, saying it would be “inappropriate” to make any further comment while the investigation was ongoing.

The Lode Lane assembly plant in Solihull makes the Land Rover Discovery and Range Rover Sport, along with the Jaguar XE and F-Pace models. It has trebled in size since 2011 as JLR has grown to become the biggest carmaker in the country.