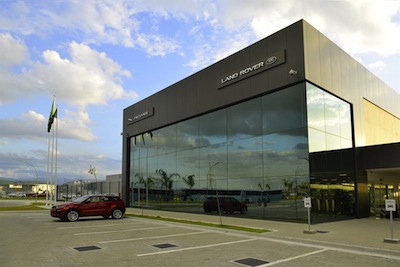 Jaguar Land Rover (JLR) has opened its 750m reais ($215m, £152m) manufacturing facility in Brazil. It is the first wholly-owned manufacturing plant the carmaker has set up outside of the UK (its plant in China is a joint venture with Chery), and the first automotive facility opened by a UK-based carmaker in South America.

Situated in Itatiaia, in the state of Rio de Janeiro, the assembly plant will make the Land Rover Discovery Sport and Range Rover Evoque. Vehicles will go on sale in Brazil this month.

"Land Rover is already Brazil's market leader for mid-sized premium SUVs, accounting for more than 30% of all sales in that segment,” said Wolfgang Stadler, executive director of manufacturing. “The Range Rover Evoque and the Land Rover Discovery Sport will now be manufactured for the first time in Latin America, building on their existing popularity with customers in Brazil."

JLR said it had sourced major components such as the seats, cockpit, exhaust, chassis and powertrain assembly from local suppliers, including Benteler and IAC. Last month IAC opened a 4,500 sq. m plant in Itatiaia to supply JLR production with cockpit modules. IAC Itatiaia assembles cockpit components provided by five of the company’s facilities in the UK.

“As we strive to meet our OEM customers’ worldwide demands, the development of our first South American plant is a testament to IAC’s global capabilities,” said IAC chief operating officer, Brian Pour. “In just six short months, we were able to set up our facility, get it operational and start supporting vehicle production.”

Meanwhile, Jaguar Land Rover said it had invested in technical assistance services to help suppliers support increased levels of localisation in the future.

JLR did not reveal which logistics and transport providers it was currently working with for the delivery of inbound parts to Itatiaia, or for outbound moves to its network of dealers in Brazil.

Marcelo Wilson Navarro has been appointed as senior manager for Material Planning and Logistics (MP&L) in Brazil ahead of the plant opening in Itatiaia.

Jaguar Land Rover has been selling cars to Brazil for more than 25 years. In the first five months of 2016, it saw sales increase by 11% in the struggling market.

Land Rover is the leading premium SUV brand in Brazil and Jaguar is one of the country's fastest growing premium brands, with sales increasing by 70% in the first five months of 2016, according to the company.