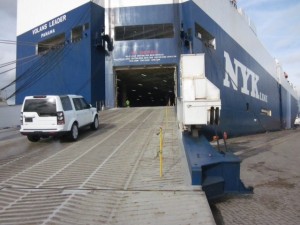 NYK Group’s European division has secured a contract with Jaguar Land Rover (JLR) to transport vehicles from the port of Southampton in the UK to the US West Coast port of Hueneme. It is the first time JLR have used NYK for ocean services. Shipments began earlier this year in January with a minimum of two per month.

"It was with great pleasure that I heard that Jaguar Land Rover had entrusted NYK with their first ro-ro ocean contract, for the carriage of their cars to the US West Coast,” said Hiroyuki Okamoto, corporate officer and general manager of NYK Automotive Transportation. “The trade lane to the USA is a very important one for NYK, and we are honoured to be asked to play a part in Jaguar Land Rover's growth in this market. We look forward to working together in a long term partnership."

Jaguar Land Rover, which generates 85% of its revenue from exports, saw sales in North America climb 21% in 2013, second only to its biggest market in China and Asia Pacific (+30%).