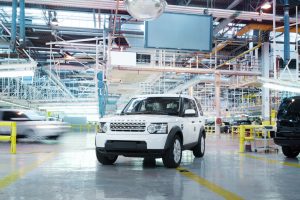 Jaguar Land Rover (JLR) has confirmed that it will shed 1,000 agency staff jobs at its Solihull plant in the UK Midlands over the next two years because of “continuing headwinds impacting the car industry”. The carmaker, which is the UK's biggest producer, confirmed that in March sales were down 26% in the UK and 16% in Europe, which together account for 45% of its domestic production. Output is expected to be cut as a consequence, though the carmaker would not provide forecasts on the reduction.

The company said that retail sales were 83,732 for March and 172,709 for the fourth quarter, down 7.8% and 3.8%, respectively, primarily due to lower UK sales, and to a lesser extent reduced sales in Europe. UK industry sales, meanwhile, were down 15.7% in March and 12.4% in the quarter, more than could be explained by lower diesel sales – although March 2017 was an all-time industry record due to a sales rush before the introduction of higher vehicle taxes in April.

Despite the bleak figures for March, the company reported retail sales of 614,309 vehicles for the financial year ending March 31, up 1.7% on the previous year.

“Weaker market conditions in the UK and Europe, driven by lack of consumer confidence and lower demand for diesels, are impacting our growth,” said Felix Brautigam, CCO at the Tata-owned carmaker. “But even against this backdrop it’s good to see that we have closed our financial year with record retail sales.”

The majority of the vehicles JLR makes are driven by diesel engines. Land Rover accounted for the majority of sales in the last fiscal year, with 439,749 vehicles sold. However, in 2017 overall sales of diesel vehicles in the UK fell more than 17%, according to figures from the Society of Motor Manufacturers and Traders (SMMT).

In Europe, diesel sales decreased 7.9% in 2017 and showed a marked dive of 20.5% in December, according to figures from analyst Jato Dynamics, indicating that the downward trend was gathering pace.

The Solihull plant, where the agency job cuts are being made, produces the Range Rover, Range Rover Sport and Range Rover Velar, as well as the Land Rover Discovery and Jaguar XE. JLR exports 80% of the vehicles it makes across its three plants in the UK, which also includes Castle Bromwich and Halewood.

The company added that it would be moving 360 jobs to Solihull from the nearby Castle Bromwich plant, which makes the Jaguar XE, XF, XJ and F-Type.

JLR said that, despite the cuts to agency staff, it was continuing to recruit large numbers of skilled workers and invest in new products and technologies.

“We also remain committed to our UK plants, in which we have invested more than £4 billion [$5.7 billion] since 2010 to future-proof manufacturing technologies to deliver new models,” the company stated.