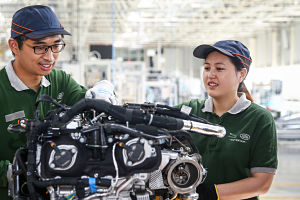 The plant will initially build the new Ingenium 2.0-litre, four-cylinder engine at a rate of 130,000 units a year. The production line is highly flexible: featuring 28 robots, it can produce multiple engine models at the same time.

JLR, headquartered in the UK, has car assembly plants in Brazil and China, and a manufacturing contract with Magna in Austria; it is also building a plant in Slovakia.

Earlier this month, the company said its new Jaguar E-Pace compact SUV would only be produced in Austria and China – making it the first of its cars not to be manufactured in its traditional home of the UK.

During the first six months of this year, JLR sales increased by 26% in China.

In 2014, the CJLR joint venture opened its manufacturing plant in the Changshu Economic Development Zone, 80km north of Shanghai.

At the time, China was already the carmaker’s single largest market.