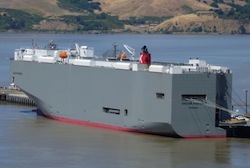 A number of global ocean carriers, including Japan’s NYK Line and ‘K’ Line, are facing a round of fines because of non-competitive behaviour in their vehicle shipping business, this time by a Japanese regulator.

The carriers have now been served with preliminary findings into an investigation by the Japanese Fair Trade Commission (JFTC) into unfair practices related to the to Japan Anti-Monopoly Act, which began in September 2012. The JFTC’s final decision on the action to be taken against the carriers is expected in the second quarter.

The allegations of non-competitive behaviour relate to the shipment of vehicles from Japan to Europe.

The JFTC has sent advance notices of fines, or draft surcharges alongside ‘cease and desist’ orders to NYK, “K” Line, as well as rival ro-ro and logistics provider Wallenius Wilhelmsen Logistics (WWL). The JFTC have not published any information on the total expected amount of the fines but according to The Japan News the total is expected to be in the range of 23 billion yen ($220m). WWL have said that they are facing a $33m figure on the Japan to Europe trade lane.

No similar action has yet been announced against Mitsui OSK Line (MOL) or Eukor Car Carriers, which were part of the same investigation. Taken together, however, the companies account for about 70% of the global market for the ocean transport of cars and special equipment indicating the dramatic scope of the alleged malpractice.

The vehicle carriers are not expected to announce a decision on how they will respond to the notices until next month.

NYK issued a statement confirming it had received advance written notice from the JFTC, which it had taken “seriously and with the greatest of concern”. The company said it will be carefully reviewing and assessing the content of the notice and would “cautiously consider the most appropriate response”.

It added: “NYK wishes to express its apologies to shareholders, customers and all relevant personnel for the great deal of concern caused by this matter.”

At the same time the company announced a recording of extraordinary loss equal to 13.5 billion yen ($131m) for fiscal year 2013 as “a provision of reserve” in conjunction with its the advance warning notices from the JFTC.

Likewise, “K” Line acknowledged receipt of the orders and fine notices echoing NYK’s point that it took the matter “with the utmost gravity” and would be considering its response carefully. The impact on the company’s financial results is as yet unknown.

WWL also confirmed that it had received the order and surcharge because of unfair trade practice.

“WWL takes the matter very seriously and has cooperated fully with the JFTC throughout the investigation,” it said. “The company will now carefully review the draft decision, in order to respond to the JFTC's preliminary findings.”

The companies are accused of violating Article 3 of the Japan Anti-Monopoly Act concerning Unreasonable Restraint of Trade.

Previous fines for NYK and “K” Line from FMC
The conclusion of the JFTC investigation comes on the heels of a similar investigation carried out by the Federal Maritime Commission (FMC).

In December last year the FMC said it has reached agreements on civil penalties imposed on NYK and ‘K’ Line in which the former paid just more than $1.2m and the latter $1.1m. These fines were imposed for violations of the Shipping Act where the companies were found to be “acting in concert with other ocean common carriers with respect to the shipment of automobiles and other motorised vehicles by ro-ro or specialised car carrier vessels, where such agreement(s) had not been filed with the Commission or become effective under the Shipping Act”.

According to the FMC the agreements also addressed related activities and violations over several years and on numerous US trade lanes including those to and from the Far East, Europe, the Middle East and South America.

“These penalties underscore the seriousness with which the Commission views the carriers’ obligation to file with the Commission any agreement with other carriers affecting working relationships in the US trades, both for import and export traffic,” said FMC chairman Mario Cordero, adding that investigations into other carriers implicated were continuing.

Complicated environment
Carmakers and manufacturers of high-and-heavy equipment are not commenting on the conclusion of the most recent investigation by the JFTC, though when it was launched one reliable source told Automotive Logistics that it had been “interesting” to see that requests for pricing seemed to yield consistent patterns among the carriers.

Prior to the revelation that the JFTC was taking action against NYK, the shipping company’s president, Yasumi Kudo, said it was addressing a “complicated environment” with regard to anti-trust law by setting up an executive committee to oversee compliance.

“[T]he current trend seems to be toward narrowing the range of businesses exempted from the application of antitrust law,” said Kudo in his New Year message at the beginning of 2014. “Under such circumstances, it has become increasingly important for us to clearly understand the content of antitrust law and [the] tendency to strengthen governmental regulations that subject businesses to these laws.”