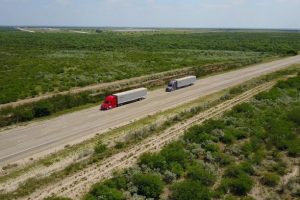 Each platoon consists of three 12-metre trucks, spaced about 35 metres apart and driving at 80km/h on motorways near Tokyo, according to a report in the Nikkei business newspaper.

Trading house Toyota Tsusho, part of the Toyota Motor Company, is handling the project on behalf of all parties, including the ministry of economy, trade and industry.

Though each truck has a driver, the aim of platooning is ultimately for a number of unmanned vehicles to follow one, human-operated truck. The companies involved plan to reach that point in 2020 and bring the technology to market from 2022.

All the trucks in the Japanese trial feature co-operative adaptive cruise control, vehicle-to-vehicle communication, cameras and millimetre-wave radar, which measures the distance between each vehicle and any other objects in front of them.

Given the speed of communication between the vehicles and the faster reaction times of each automated truck compared to a human driver, shorter distances can be safely maintained between them, leading to reduced fuel consumption and lower CO2 emissions, as well as increasing the space available for other road users. Platooning also reduces the need for human drivers, helping to address widespread skills shortages.

Daimler’s participation in the Japanese test follows on from similar work in the US (pictured) and, before that, Europe.

Martin Daum, Daimler board member responsible for trucks and buses, said Japan was “a key market” for the OEM and that it was taking part in the government trial “to push platooning further ahead in Asia and to remain in the lead in the development of this technology”.