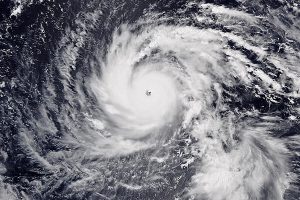 The majority of OEMs in Japan appear to have missed the main brunt of a typhoon that hit Japan’s central region around Osaka last week and of an earthquake in Hokkaido, in the north of the country, that followed shortly after – though production at Toyota’s car assembly plants has been affected and there have been disruptions to the supply chain.

Typhoon Jebi hit Osaka on September 4 and was recorded as the strongest storm to have hit the Japanese mainland in 25 years. It caused widespread damage and closed Kansei International Airport. It also smashed a fuel tanker into the bridge connecting the airport, which is on a manmade island, to Izumisano City. Elsewhere, the BBC reported that dozens of vehicles had been destroyed at a depot in Nishinomiya, between Osaka and Kobe, as water short-circuited electrics.

Following that, a 6.7-magnitude earthquake hit the island of Hokkaido in the north of Japan in the early hours of September 6 (Thursday).

As a precaution, Hokkaido Electric Power shut down its power plants temporarily and although back on now, full power is only expected to be restored later this week.

Toyota takes a hitToyota took precautions during the typhoon and closed 11 of its factories early, cancelling evening shifts. Regarding the earthquake, the carmaker said production had been affected by the power supply problems as well as parts shortages. In a statement, it said it would restart production at its plants in the region in stages between September 11 and 13.

Toyota Motor Hokkaido, which makes transmissions and powertrain parts at a plant in Tomakomai, has restarted some production. The Motomachi plant will start production on all lines from Tuesday this week. The Takaoka, Tsutsumi and Tahara plants will have all lines working by Thursday. Toyota Group company plants, including those supplying parts internationally, that have also been affected are Toyota Industries, Toyota Auto Body, Gifu Auto, Toyota Motor Kyushu, Toyota Motor East Japan, Hino Motors and Daihatsu Motor.

Mitsubishi, which has plants in the south-west of Japan, escaped the impact of the earthquake and reported that damage from the typhoon was minor and that all of its facilities, which include three car plants and two powertrain facilities, were in operation as usual.

Honda and Nissan also said manufacturing operations in Japan had not been affected by either event, though Nissan did say that its proving ground in Rikubetsu had been temporarily inoperative because of the loss of power.

“Similarly, loss of power caused most of our dealerships in Hokkaido to close temporarily; they reopened gradually during the weekend as power was restored to each area,” said a spokesperson for Nissan.

Honda said it was carrying out further investigation to confirm details of each operation.

Mazda, which is still recovering from the impact of the bad flooding that affected the western part of Japan in July this year, said that neither its production or supply chain had been affected by either incident.

Japan is regularly hit with storms during the Pacific Typhoon Season running from May to October. As well as the flooding and landslides in July, Typhoon Cimaron hit the west and north of the country in August.

The latest incidents pale in comparison to the Tohoku earthquake and tsunami, which devastated the country in 2011 and brought down global automotive supply chains.

Two earthquakes also hit the Japanese island of Kyushu in 2016 and halted operations at assembly facilities across the country, including Honda, Nissan, Toyota and Mitsubishi.