Imports of vehicle parts to Japan are on the increase as OEMs look to reduce cost, expand their business and change their sourcing strategies to include low cost countries. Risk management is also a factor in diversifying the supply base but this comes with its own costs 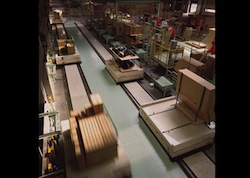 Japan saw the value of automotive parts imported to the country hit nearly 60 billion yen ($600m) in May this year, according to trade statistics from the Japanese Ministry of Finance. The rise is part of a growing trend in Japan in recent years to use more globally sourced parts, with analysts pointing to attempts by Japanese manufacturers to diversify sourcing strategies and limit risk in the supply chain.

Japan has traditionally relied on a more domestic and closely-knit supply chain, with focus on supplying parts to local factories just in time as well as exporting to global production sites. But according to analyst firm IHS Automotive, Japanese OEMs are using the supply chain to reduce costs and expand overseas business. However, using a larger number of global suppliers can also add expense and create new challenges for logistics managers in Japan.

The rise in parts imports is also backed by figures from the Japan External Trade Organisation (Jetro), which showed May as the peak month so far this year for vehicle parts imports measured by value, at around $595m. Jetro’s figures show that growth per month in the value of imports has been largely consistent since February this year, though February saw a decline year-on-year of 6.6%.

Last year overall, Japan’s imports of vehicle parts hit nearly $7 billion, according to Jetro, an 18% year-on-year increase and the third consecutive one since the almost 40% decline recorded in 2009, when production collapsed following the financial crisis.

Japan’s growth in parts imports is still small in comparison to the volume imported by other countries and compared to the country’s automotive parts exports. During 2012, for example, Japan exported $15.5 billion more automotive parts to the US than it imported from the country, according to the US Department of Commerce. Jetro figures show that in May this year Japan exported vehicle parts in total worth $2.8 billion compared to the $600m it imported. The value of exports of parts in total up to and including May this year already works out at around $14.9 billion. 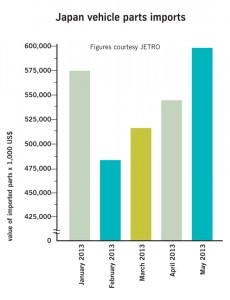 However, parts makers, including Johnson Controls, Delphi and Bosch, are reported as seeing an increase in parts going to Japan. According to business news source Bloomberg, Germany’s Bosch has said it expects to benefit as Toyota cuts its reliance on Japanese suppliers in favour of larger global companies. Bosch, however, said it did not provide detail about trends in the supply of its products to individual countries. Bloomberg also reported that changes in the way Toyota and Honda Motor now buy parts is opening the way for Delphi to build market share in Japan, though Delphi would not provide further detail.

Four reasons for increase
Hiroshi Ataka, components forecast manager at IHS Automotive, Japan said there are four reasons for the increase in imported parts to carmakers operating in the country: cost reduction, business expansion, a change in OEMs’ sourcing strategies and risk management.

“Carmakers request at least 3% cost reduction every year from the suppliers,” Ataka told Automotive Logistics. “One of the reasons behind this is the strong exchange rate of the Japanese yen. Since October 2008, the Japanese yen had been getting stronger against the US dollar forcing suppliers to transfer production outside of Japan.”

The yen has since weakened against the dollar by more than 20% in the last year, bringing it back to the levels of mid-2008. However, the globalising trend over the past several years has continued, even if moderated. With a weaker yen, sales made in a foreign currency and sent back to Japan are also more profitable.

At the same time, post-recession business growth is being led by emerging markets, such as China. Japanese suppliers, like their carmaker customers, have invested considerably in those markets.

Ataka said that those suppliers are now exporting low cost components to Japan. “When the logistic cost is considered, if there is a cost advantage, OEMs and suppliers will import components from overseas to Japan,” he said.

Those components are most likely to small-to-medium size such as electronic control units (ECUs), lighting and seat frames, which are more cost effective when imported than when they are produced in Japan. Larger components, such as instrument panels, body press or moulding parts are better locally produced and are often located near the car assembly plants.

An additional factor in the higher sourcing of imports from overseas is down to the fact that Japanese OEMs have changed their vehicle design and sourcing strategy and moved more in line with European and American OEMs, including cross-selling components from subsidiary suppliers to other manufacturers.

“In former times, Japanese OEMs had a tendency to be afraid of the leakage of their own technologies to competitors overseas [and] didn’t allow their subsidiary suppliers to sell components to competitors,” explained Ataka, adding that this has now changed.

Risk considerations
There is also the question of risk management in the wake of the natural disasters, such as the Japanese earthquake in 2011 and the flooding that hit Thailand later that same year, which caused so much disruption to the global supply chain.

Japanese manufacturers are looking for a greater diversity of suppliers to reduce the risk of parts shortages. However, according to Julian Buckley, principal analyst at IHS Supplier Business, while good for maintaining part deliveries in a crisis, this last strategy, aimed at increasing diversity, has the downside of adding expense.

“In the case of the natural disasters in Japan and Thailand, an on-going source would have had to have been available at a location away from these areas. Clearly there was not [a secondary source available] as the affected OEMs could not justify the related expense,” said Buckley.

There is also the issue of copyrighted or proprietary technology, which dictates that not all parts can have multiple sources, he added.

With more vehicles produced across multiple global platforms, OEMs have also been securing more global contracts, which would allow a supplier in one region to supply parts in another if there was a disruption. However, in the case of having two separate suppliers delivering the same part, those suppliers lose out on economies of scale, while the OEM incurs the added costs, including time, of managing two individual suppliers.

“To avoid disruption in the supply chain a company can hold as much inventory as required for a set period of production, which is problematic in terms of capital investment and the risk of redundant technology,” said Buckley. “Alternatively it can secure sourcing of identical parts that have been through the prerequisite testing from two different locations.”

The growth in imports suggests that overseas sources for Japanese production, not least in wider Asian markets, are being used to supplement localised supply, a trend that will test the logistics management of longer supply chains and how they balance longer transport times with the needs of the order-to-delivery cycle.