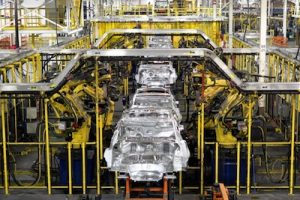 The earthquakes that hit the Kumamoto region of Japan’s Kyushu island on April 15th-16th, knocking out production at assembly and supplier plants across the country, have now also affected automotive production in North America.

GM has suspended production for two weeks (from Monday April 25th) at four of its high volume plants in North America because of parts shortages resulting from damage to suppliers around the Kumamoto region. The affected facilities are Spring Hill, Tennessee; Lordstown, Ohio (pictured); Fairfax, Kansas; and the Oshawa Flex Assembly plant in Canada.

The company said the move was not expected to have any material impact on its full-year production plans in North America or on its financial results for the region. It did not comment on the type of parts affected or the efforts it was making to source them from other facilities, stating only that it was continuing to evaluate the situation.

The Kumamoto region is home to a number of global component suppliers, including body and engine parts maker Aisin Seiki, which has three plants there. The company said it was shifting production from the Aisin Kyushu facility to other locations because it was evident it would “take some time before production at the site can be resumed”.

“To enable the swift resumption of product supply to our customers, we have commenced production at alternate sites, primarily affiliates in the Kyushu region and the Aisin Seiki plant in Aichi Prefecture,” said the company in a statement. “Also, we have already begun importing some products from overseas to fill the gap left by suspension of operations.”

Another company that supplies carmakers globally from Japan is Renesas, which makes semi-conductors for engine control units at its Kawashiri plant in Kumamoto city. Renesas closed the plant in the immediate aftermath of the earthquake but has now partially restarted operations and will do so “step by step to reach full pre-earthquake production capacity at an earliest possible date”.

That said, Renesas is having its own material sourcing problems. “Following the main quake that occurred on April 16th, further damage has been confirmed at some of the subcontractor companies,” said the company in a recent statement. “Renesas, in cooperation with its suppliers and partner companies, is accelerating recovery efforts, while also considering production at alternate manufacturing sites, to achieve an early recovery of the supply chain.”

Global effectsAs was the case in the Tohoku earthquake that hit Japan in 2011, damage to subcomponent supplier plants as a result of the latest incident has had a widespread affect on global automotive production.

The disruption to Aisin Seiki and Renesas has affected Toyota more than any other carmaker. Following widespread scheduled shutdowns across its own plants in Japan, the carmaker is now assessing what the impact will be at its plants overseas, though a spokesperson said it was still to early to determine the overall impact on vehicle production in the US.

Regarding its facilities in Japan, however, the carmaker said last week it would resume production on all vehicle assembly lines after a scheduled holiday between April 29th and May 5th. “The vehicle assembly lines that have remained suspended until this point will restart production, in addition to those that have or will have started operation this week,” said the company in a statement. Those facilities include the Motomachi, Miyata and Inabe plants, as well as the Gifu Auto Body facility and the Hamura plant operated by Hino Motors.

The company said it would proceed to make further decisions about operations while closely monitoring and securing the parts supply situation. 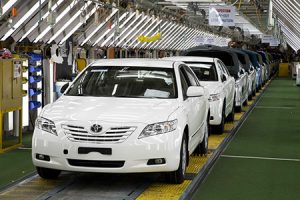 Analyst IHS Supplier Business has suggested it could take Toyota more than four months for the company to recover its lost volumes. The analyst has posed two possible supply chain scenarios for Toyota’s business in the wake of the disruption.

In the first, it suggested that, should plant operations be up and running again this week, Toyota would see a net loss of 2.1 days in April, equating to 70,000 units, of which 66,000 would be lost by the company across 15 plants. Toyota would need to add around three working days to its production schedule up to June to recover the lost volumes, it suggested.

In its second, more pessimistic scenario, the supply chain impact would run deeper with the net loss of production running to 127,000 units and additional working days required into August to recover. Even then, IHS said it expected supply restrictions would not be cleared until the third quarter. It also pointed out that because there was no tsunami following the latest earthquakes, the replacement of damaged vehicles would be less of an issue than after the earthquake in 2011.