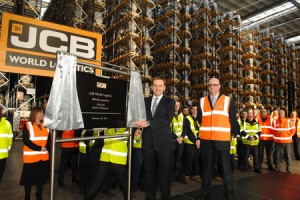 UK-based construction machinery maker JCB has officially opened its new logistics hub in North Staffordshire. The centre has been set up to receive inbound components for onward shipment to JCB's global manufacturing facilities, including those in Europe, the US, Brazil, China and India, as well as those local to the UK. It will be managed by JCB’s global logistics partner DHL.

JCB has consolidated seven other facilities into the one new centre, a move that will see road mileage reduced by 20% per year.

It has since employed 80 site staff and 20 drivers to support operations there, a number that is expected to treble over the next two years as the facility ramps up into full operation.

The facility, which will hold 25,000 pallets of components, is officially operated by JCB World Logistics, which is run by DHL Supply Chain. It will be the central receiving hub for supplier-bought components used in the manufacture of JCB products.

The facility boasts the environmental credential of being the first logistics building to receive an 'Outstanding' BREEAM rating; BREEAM is an environmental rating system for buildings established in 2008. According to JCB it is one of the most environmentally friendly facilities in the world.