JLR commits to UK supplier base for Evoque 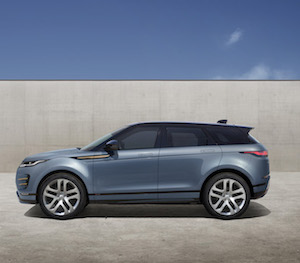 Jaguar Land Rover (JLR) has used the launch of its new Range Rover Evoque SUV to confirm its commitment to the supplier base in the UK by awarding more than £4 billion ($5.1 billion) in contracts to support production of the model.

The carmaker did not say whether any of the contracts increased UK domestic content on the vehicle but did confirm that 44% of the vehicle is sourced from local suppliers. The commitment will reassure those who have seen production at JLR drop over the last couple of years in the face of the diesel crisis and are dealing with uncertainty because of the UK's departure from the European Union.

“We have consistently sourced up to 50% of our components from UK suppliers,” a spokesperson told Automotive Logistics this week. “Having a UK supply chain that is amongst the most competitive in the world has always been a priority for Jaguar Land Rover.”

The carmaker has invested £1 billion in making the latest edition of the Evoque, with money going into areas including research and development, design, advanced technology and manufacturing. That includes the development of flexible manufacturing at the Halewood plant in the UK, which has a new stamping line and hybrid electric assembly technology, alongside what it describes as “significant extensions and upgrades to existing facilities”.

“Our commitment to UK production remains firm and the new Evoque benefits from a £1bn investment,” said Ralf Speth, JLR's chief executive. “With this, we are introducing new technology and Range Rover refinement into the luxury compact SUV segment that the original model created.”

Overseas productionHowever, at the same time it announced the investment in the supplier base, JLR said that demand for the latest edition of the Evoque in overseas markets would now be met by production abroad.

“Although most Range Rover Evoques are made at Halewood, and 80% of those are exported, we already meet local demand for some markets with production at our overseas locations,” said the spokesperson for JLR.

Halewood currently exports nearly 90,000 Evoques annually based on that 80% figure, suggesting that the shift to production abroad would have a dramatic impact on production and the outbound supply chain in the UK over the longer term. Not so, according to JLR.

“This is not a new strategy and it won't affect outbound flows going forward,” said the spokesperson.

Asked whether the move was a way of avoiding complications and export costs stemming from Brexit next year, the answer was again no.

“We will announce detail of manufacture at our overseas locations in due course, but this is not Brexit-related as European demand is met from Halewood and that will continue to be the case,” reassured JLR's spokesperson. “UK and Europe account for over 50% of new Evoque sales and we expect it to be popular with Chinese customers too.”

The carmaker is already making the vehicle at plants abroad, including its wholly-owned facility in Brazil, which opened in 2016, its joint venture plant in China, which it operates with Chery, and the plant it has in Pune, India. JLR now also has a plant in Slovakia, to which it recently moved production of the Land Rover Discovery from Solihull in the UK, and Magna Steyr in Austria also makes JLR vehicles under contract.

Chery Jaguar Land Rover has recently announced it will invest £800m in the development and production of electric cars at the Changshu plant and the new Evoque will come with a version driven by a hybrid electric engine. From 2020 the Evoque will be the first compact luxury SUV with a 48-volt mild hybrid system. It will also be available with a line-up of efficient four cylinder diesel and petrol engines and, 12 months later, a three cylinder plug-in hybrid engine.

Earlier this year the carmaker said it was cutting production at Halewood because of weaker market conditions in the UK and Europe, driven in part by a lower demand for diesels, which was impacting growth.In 2017 overall sales of diesel vehicles in the UK fell more than 17%, according to figures from the Society of Motor Manufacturers and Traders (SMMT). In Europe they declined by around 8% last year.

In its reporting for 2017 the carmaker combined Evoque sales together with Range Rover Sport and put the total figure at 190,000, a drop from the combined figure of 200,000 Evoque and Sport models sold in 2016 from 112,486 to 87,758. The drop this year is in line with an overall decrease in sales because of consumer uncertainty over diesel models, which hit profits at the carmaker last year.

Sales of the Evoque dropped sharply in 2016 from around 125,000 in 2014 to 108,600 the following year. That was because of the diesel crisis, which came to light in the second half of 2015. That said, numbers have been gradually recovering and it is still the best selling of Jaguar Land Rover's range.

JLR has been making the Evoque since 2011.