JLR counts the cost of Tianjin explosion in quarterly report

Jaguar Land Rover’s second quarter financial report to September 2015 revealed that higher retail sales in the UK, Europe and North America were offset by a 32.4% drop in sales revenue from China. The company also sustained considerable losses in China as a consequence of the Tianjin port explosions on August 12th, which destroyed more than 10,000 finished vehicles being stored at the port, including 5,800 Jaguar and Land Rover models (read more here). 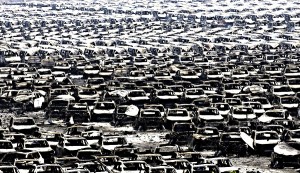 Tianjin port is one of three major locations in China through which JLR imports vehicles. Many of the carmaker’s vehicles were destroyed or damaged in the explosions, which started in a chemical storage warehouse.  The company registered an exceptional charge of £245m ($370m) in the second quarter as a result of the incident.

In its financial statement for the quarter, JLR said the process for finalising the insurance claim would take some months to conclude. As a consequence, insurance and other potential financial recoveries would only be recognised in future periods when paid or confirmed, the company said, and so have not been recognised in the second quarter period.

A number of other OEMs were also affected by the explosion, including Fiat Chrysler Automobiles, which lost 3,000 Jeep Grand Cherokees, half the monthly Jeep sales in China.

In terms of the 32.4% drop in sales (down to 20,150 units compared to 29,790 in the same quarter last year), JLR said it was down to “softening demand and the timing of new model launches, such as the Jaguar XE, which only went on sale in September this year. Additionally, the new XJ and XF models will be going on the market in 2016. The carmaker also said that the results were affected by the transition to localised production of the Evoque, which started in October last year, and the Discovery Sport, which moved into production at the Chery-JLR joint venture plant in November this year.