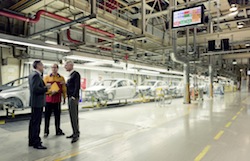 As reported last week, staff employed by DHL providing support to inbound logistics activity at Jaguar Land Rover’s plants in the UK, have taken strike action today (August 28) in a protest over pay disparities between themselves and JLR workers.

The action, which is backed by the UK’s Unite union, is affecting the carmaker’s three plants in the Midlands – Castle Bromwich, Halewood and Solihull, as well as a number of logistics centres in the region.

The industrial action amounts to a 30-minute stoppage at the start of each shift of which there are two at the Castle Bromwich plant and three each at Halewood and Solihull.

Jaguar Land Rover said this week that it was “disappointed that DHL Unite members have decided to take industrial action today.” It added that it is continuing to urge Unite and DHL to resolve the dispute as soon as possible. In the meantime the carmaker said it was minimising any disruption to production though it did not expect there to be any significant impact on output.