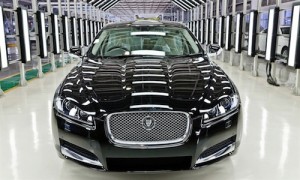 Jaguar Land Rover (JLR) has signed a letter of intent with the Slovak government to build its next assembly facility in Nitra, choosing the central European location over others in Europe, the US and Mexico for a 300,000-unit per year factory.

In a statement, JLR confirmed that it had chosen the location in part because the area was close to a strong supply base and had a good logistics infrastructure. Nitra is fewer than 100km east of Bratislava, and close to a number of major OEM production sites, including the Volkswagen Group in Bratislava, Peugeot-Citröen in Trnava and Kia in Zilina.

Subject to the outcome of the feasibility study, a final decision is expected later this year, after which point production is expected to begin in 2018. A spokesperson said the company would not be disclosing any further details relating to the supply chain and logistics benefits or its plans in this direction prior to the completion of that study. However, according to industry analyst IHS Automotive, the strong manufacturing base in the region has a sound logistics base.

“Amongst the reasons that JLR may have chosen this country include the existing expertise of car manufacturing that takes place in the country, with a particular density near Nitra,” said Ian Fletcher, principal analyst at IHS Automotive. “This will have brought with it some of the logistics and supply chain required.”

The factory is intended to add incremental volume to JLR’s current production network, which includes three assembly plants and one engine plant in the UK, a new joint venture plant in China with Chery, a plant under construction in Brazil, and a number of kit assembly plants globally, including in India.

The OEM added that the facility would make a range of aluminium vehicles at the plant as part of its commitment to deliver more lightweight vehicles, though it did not confirm which models these might be. According to Fletcher at IHS Automotive, the models are likely to be produced using the same architecture that underpins the new Jaguar XE sedan, including new crossovers for both Jaguar and Land Rover brands that are expected to be launched over the next few years.

JLR’s current supply footprint suggests that logistics benefits could be achieved from a bigger production presence in Europe through the Slovak plant, balanced with the carmaker’s established presence in the UK. According to JLR it has an annual production purchasing spend of £12 billion ($18.6 billion) and more than 2,600 suppliers, of which more than 700 are production suppliers.

Approximately 50% of those (by spend) are in the UK, with more than 400 suppliers in wider Europe.

"With its established premium automotive industry, Slovakia is an attractive potential development opportunity for us,” said Dr Ralf Speth, JLR’s chief executive. “The new factory will complement our existing facilities in the UK, China, India and the one under construction in Brazil."

The company launched production at its factory in Changshu, north of Shanghai, earlier this year, where it produces the Range Rover Evoque. It also started construction on a facility in the state of Rio de Janeiro at the end of last year. Brazil will be the company's first wholly owned overseas manufacturing plant. It will be operational in early 2016 and will produce the Discovery Sport.

IHS forecasts that the crossover vehicles planned on the XE sedan architecture would further lift JLR’s wider global sales and see them grow from 454,000 units during 2014 to around 828,500 units by the end of 2020.

Premium footprint
At the beginning of last month, JLR signed an agreement with contract manufacturer Magna Steyr in neighbouring Austria for assembly of an as-yet unnamed model.

The spokesperson for JLR said this arrangement would not be affected by plans for production in Slovakia. Rather, JLR’s choice of Slovakia, together with output in Graz, aligns its production network further to compete with German brands in Europe. The Volkswagen Group builds the Audi Q7 in Bratislava, while Audi and Mercedes-Benz are in neighbouring Hungary.

If the carmaker were to follow similar patterns for its supply chain as the other brands, JLR’s supply chain in Slovakia is likely to be characterized by a high use of rail transport out of the factory both for distribution in Europe, and to ports for export.