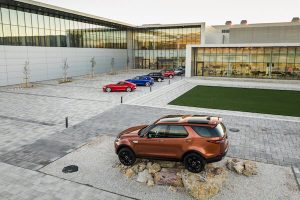 Jaguar Land Rover has announced it will open a technical engineering office in Budapest, Hungary, early next year to support the management of its European supply chain. It follows the official opening of its €1.4 billion ($1.6 billion) assembly plant in Nitra (pictured), in neighbouring Slovakia, on October 25.

“The team in Budapest will complement the suppliers and supplier technical assistance that we already partner with in the region, as well as our teams in the UK,” said Rogers.

The Budapest office will form part of JLR’s overall engineering network, which covers the UK and Republic of Ireland, along with China and North America.

“Today's announcement by Jaguar Land Rover marks a new chapter in the Hungarian automotive industry as we welcome a new premium OEM to our country,” said Péter Szijjártó, minister of Foreign Affairs and Trade in Hungary.“The decision of the UK's largest automotive manufacturer to open a technical engineering office in Budapest reaffirms our foreign direct investment strategy and in particular our specific focus on high quality automotive-related growth.”

Appetite for HungaryA number of suppliers have been investing in Hungary of late, according to information from the Hungarian Investment Promotion Agency (HIPA). In September this year, Continental started work on an electronic component manufacturing plant in Debrecen. The tier one supplier is investing €100m ($114m) in the facility, which will be its sixth in Hungary. Polymer expert Rehau also started work on a €150m facility in Ujhartyán, which will make components for local carmakers.

Along with JLR, BMW announced in August that it would be building a €1 billion assembly plant in Debrecen. The German carmaker said it had chosen the location because of the advantages it offered in terms of infrastructure, logistics connections and proximity to the supplier network. It also said that a key advantage of the area was its qualified personnel.

Mercedes-Benz Cars, meanwhile, is already building a second plant in Kecskemét, based on a flexible production concept. The first cars are expected to start rolling off the new production line at the start of the 2020s.

Audi has been present in the country since 1993.

In reference to JLR’s new 300,000 sq.m assembly facility in Nitra, the company said that it stood “at the forefront of aluminium manufacturing and engineering expertise in Slovakia”. It will make the Land Rover Discovery, as announced in June this year, and have an annual capacity of 150,000 vehicles a year.

The carmaker first announced that it would build a plant in Slovakia back in 2015.

Péter Szijjártó will be joining leading automotive logistics executives, including from Jaguar Land Rover, at this week’s Automotive Logistics Central and Eastern Europe summit, which takes place on November 13-14 in Budapest